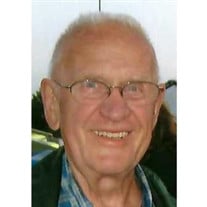 Zigmund L. Tomaszewski “Ziggy”, age 89, passed away in the early morning hours of September 13, 2021. He was born April 22, 1932 in Melvindale, MI to the late Zygmunt and Lottie Tomaszewski, after moving several places (Del Ray, Hamtramck, West Branch) his teenage years were spent at the family orchard on the Armada/Richmond border. After graduating from St. Augustine Catholic High School in 1950, he joined the United States Air Force serving during the Korean War Ziggy was stationed in Germany and at Selfridge Air Base. He returned to Richmond when his service ended and met Mary Pozdrowski and they married September 17, 1955 at Holy Rosary Catholic Church in Smith Creek. Mary preceded him in death on December 5, 2018. Ziggy was a truck driver by trade, having worked at Ogden & Moffett for 36 years. Not one to “retire” he took part time maintenance jobs first at Aeroquip and then at Schefenckers. He could fix or rig up anything you asked him to. Most days you could have found him cutting grass, tinkering with something or stripping scrap copper wire. He was a very involved veteran, having belonged to the VFW, DAV and was life member of the Smith Creek American Legion Post 525. Where he had been Past Commander, longtime Finance officer and St. Clair County Veteran of the Year in 1977. He spear headed many projects, bingo, poppy sales, many dances and dinners. He participated in the stay alive coffee breaks at the rest area near the St. Clair exit, He was one of the first persons you saw at the First Friday Fish Fry. When he was able, you’d see him out and about collecting donations for various charity drives or selling raffle tickets for St. Mary’s Festival. Ziggy was also a life member of the Knights of Columbus MSGR. Kromenaker Council #2251 where he was involved in the gun raffle or the tootsie roll drive. Ziggy is survived by his sons; David (Christine) Tomaszewski, Raymond (Cathy) Tomaszewski; daughter, Kathy Tomaszewski; brother Harry (Geri) Tomaszewski or Traverse City; his “buddy” Rita Jaworski and honorary daughter Julie Krauss; 5 grandchildren, Jason Bell, Jennifer Tomaszewski, Michael Tomaszewski, Gavin (Holly) Menzies and Scott Krauss; 5 great grandchildren, Bria, MaKayla, Caleb, Oliver, Fiona. Ziggy is preceded in death by his daughters Linda and Ann Marie; sister, Jean Tomaszewski; sister/brother-in-law Laura (Vince) Weingartz. The family would like to express our gratitude to the girls from Rx Family Home Care for the care they showed dad and a special thank you to the group at Tin Man Recycling and Scrap for the respect and thoughtfulness they showed towards him. A funeral mass will be Friday September 17, 2021 at St. Mary’s Church at 11:00 a.m. visiting hours will be Thursday September 16, 2021 from 2:00 to 8:00 p.m. at Young Funeral Home, China Twp. with a Rosary being recited at 7:00 pm. Memorials may be made to wishes of the family. To leave a message of comfort visit www.youngcolonial.com

The family of Zigmund L. "Ziggy" Tomaszewski created this Life Tributes page to make it easy to share your memories.

Zigmund L. Tomaszewski “Ziggy”, age 89, passed away in the early...

Send flowers to the Tomaszewski family.