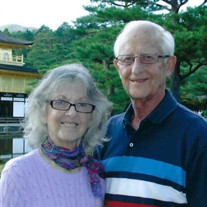 Wilma Lillian Balok went to be with her Lord and Savior Jesus Christ on December 18, 2021. Lillian was born on October 12, 1937 in the former Yugoslavia and lived in Austria prior to emigrating with her family to the United States at age 12, residing in Detroit. Already a speaker of three languages, she quickly mastered English and then flourished at Pershing High School. She was especially gifted artistically, which she attributed to her mother’s influence, excelling as a graphic artist in automotive design at Chrysler. Upon her marriage to Edward Balok, her talents blossomed as she assumed her ultimate calling as a wife and mother. From raising, preserving, and preparing her own food, to sewing and knitting her children’s clothing, to hosting fantastic gatherings with tables laden with homemade delicacies, her selflessness knew no bounds. If there was a need, she noticed and took action, whether within the family or outside. She created untold numbers of beautiful hand-sewn quilts and knitted baby items and organized clothing drives with her sister for the disadvantaged around the world. Throughout Lillian’s married life she acted as her husband’s administrative assistant in his independent business. Once her children were grown she greatly enjoyed traveling, each annual Christmas card showing her and Ed smiling in yet another exotic location. Lillian’s beauty, charisma, and exuberance lit up the room even in her later years. She was the ultimate Proverbs 31 woman, living her life with purpose and diligence. Her beloved husband of 60 years accompanied her in death as in life, shortly after her. She was predeceased by her brother Karl, her sister Katherine, and her great-grandson, Silas. She is survived by her brother, Oskar and sister, Esther, five married children: Pamela (Preston), Michael (Amy), Gregory (Kimberly), David (Amy), and Kurt (Jill); and nine grandchildren: Katherine (Aaron), Ryan (Bailey), David, Brian, Nathan, Aaron, Elizabeth "Ellie", Nicholas, and Haley. Private services have been held. Interment at Guardian Angel Cemetery, Rochester. Arrangements by Young Funeral Home, China Twp. To leave the family a message of comfort visit: www.youngcolonial.com

Wilma Lillian Balok went to be with her Lord and Savior Jesus Christ on December 18, 2021. Lillian was born on October 12, 1937 in the former Yugoslavia and lived in Austria prior to emigrating with her family to the United States at age 12,... View Obituary & Service Information

The family of Wilma Lillian Balok created this Life Tributes page to make it easy to share your memories.

Wilma Lillian Balok went to be with her Lord and Savior Jesus...

Send flowers to the Balok family.