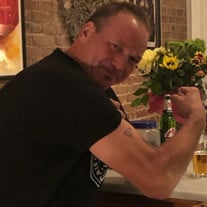 Tyler Jason Hunter Driscoll, (Ty) 52 years old of Brooklyn New York, (formerly of St.Clair) Passed away unexpectedly On February 7th, 2022. Tyler was born January 8th, 1970 and raised In St. Clair, MI by his parents Dale and Esther Driscoll. He attended SCHS and was a very talented flooring /tile Man. His work took him to several states, With the majority of it in Brooklyn, N.Y. area. He was well known in the neighborhoods and never met a stranger that didn't become a friend. You could always count on him to lend a hand, whether it be helping the lady down the street or giving a homeless man his jacket, he was very compassionate. Ty was a charmer and a story teller. He spoke often of writing a memoir about his childhood growing up on Third and Vine. His ability to remember every memory was quite impressive. His laugh was so contagious and he always had a funny story to go with it. Ty's love for his family and friends was strong. He called his mother daily, sometimes twice just to make sure everything was o.k. and that he loved her. He was that guy that called everyone and before hanging up, it was always wait wait I just have one more story to tell ya. He always called to sing you Happy Birthday and to tell you he loved and missed you. The good lord definitely received one of the good ones and he will be terribly missed by all that knew him. "The essence of life is to care, The secret of life is to dare, The adventure of life is to learn, The challenge of life is to change, And The joy of life is to LOVE.". Tyler is survived by his Mother Esther Driscoll. Siblings, Jennifer (Mark) Phillips, Josh Driscoll (Lacee), Tiffany (Pete) Meldrum, and Jeff Shafran.. Also several Nieces and nephews that he adored Estee Dale (Robbie Wierszewski), Rorie Dale, Tyler (Bailey,) Jackson, Jordan Jackson (Shelby) also his love and companion Vanessa Stoute, Preceded in Death By his father Dale Driscoll, Grand Parents John and Mae Little, Helen little, Berneice and Ansel Driscoll. Cremation has Taken place. A memorial will take place in Brooklyn N.Y Before he comes home to his final resting place. The Family will Have a Celebration of life On Saturday, February 19th from 1:00-4:00 at The Voyageur Restaurant in St. Clair. Memorials are suggested to the wishes of the family.

The family of Tyler Jason Hunter Driscoll (Ty) created this Life Tributes page to make it easy to share your memories.

Send flowers to the (Ty) family.