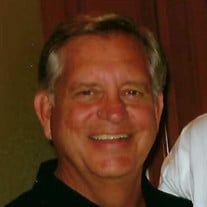 Thomas B. Shorkey, 74 years old, passed away peacefully at home after a long struggle with cancer on September 7, 2021. Tom was born on September 10, 1946 to the late Bernard and Bertha Joachim Shorkey. Tom lived his entire life in the Blue Water Area and was a noted educational leader. Tom was a teacher, principal, and Superintendent of schools for the East China School District for 12 years. He was distinguished for his ability to effectively communicate with teaching staff, students, parents and all employee groups. After retirement he conducted Superintendent searches for the Michigan Association of School Boards. During one of the searches, he was asked to be the Superintendent for the Royal Oak School District. Finally, he went on to become the Superintendent for Port Huron Area School District. Tom was active in many educational organizations in the Blue Water Community and also at the state level. Tom enjoyed doing volunteer work, and recently volunteered as the host for the CTV, community television, Channel 6 program, “Conversations”. Tom enjoyed golf, bicycling and all sports, especially basketball. He also was an avid reader, enjoying historical non fiction and documentaries. He loved playing cards, a game of scrabble with his grandchildren and was a daily crossword puzzle enthusiast. Tom is survived by his wife of 34 years, Judith, his children, Amy (Michael) Wentrack, Andrew (Maura) Shorkey, stepchildren, Bernie (Susan) Kuhn and Angela Kuhn McHugh and Daniel McHugh. Tom was blessed with 10 wonderful grandchildren, Jane, Maggie and William Wentrack, Avery and Luke Shorkey, Caroline and Emily Kuhn and Joshua, Nathan and Shorena McHugh. He is also survived by his brother, David (Brenda) Shorkey and loving sisters in law and brothers in law, Janet Moilanen, Jane (Michael) Laws, Elsie Plivelich, Steven Plivelich and Ken Lowe. Tom had many nieces, nephews, special friends and his only surviving Aunt, Pansey Shorkey, 103 years. Tom was preceded in death by his sister Mary Lowe, brothers in law, Tom Plivelich and Henry Moilanen and sister in law Deborah Plivelich. The family wishes to thank our family members, friends, teaching staff and education colleagues for the many cards, calls, texts, emails, and personal visits over the past few months. They were a loving and positive support to him. Funeral services will be held Saturday September 11th at Young Funeral Home, China Twp. Visitation is from 11:00 a.m. to 1:00 p.m. with the service beginning at 1:00 p.m. Private interment will be held at a later date. In lieu of flowers any memorials may be made to the Community Foundation of St. Clair County Scholarship Fund, portal for East China Schools. To leave a message of comfort visit www.youngcolonial.com

Thomas B. Shorkey, 74 years old, passed away peacefully at home after a long struggle with cancer on September 7, 2021. Tom was born on September 10, 1946 to the late Bernard and Bertha Joachim Shorkey. Tom lived his entire life in the Blue... View Obituary & Service Information

The family of Tom Shorkey created this Life Tributes page to make it easy to share your memories.

Thomas B. Shorkey, 74 years old, passed away peacefully at home...

Send flowers to the Shorkey family.