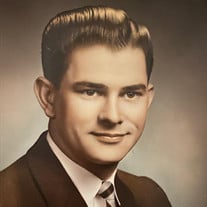 Terry L. Good (T. Good), 84, of East China, went to be with the Lord on November 2, 2020. Terry leaves behind his beloved high school sweetheart and wife of 65 years, Janet Good. Terry and Janet were blessed with 5 children, Terry Good (Cindy), Janet Good, Linda Bahbah (Jim) and twins, Sandy Good (Mary Ann) & Randy Good (Ann), along with 17 grandchildren and 13 great grandchildren. Terry was born in Detroit to Stanley & Sybyl Good. He grew up in Ferndale with his brothers Robert, Thomas and sister, Nancy. Terry graduated from Lincoln High School, Ferndale and he received a Bachelor’s of Arts degree from Detroit Bible College shortly after he accepted Jesus Christ as his personal Savior. Terry was a hard working, talented and accomplished man throughout his life. He served our country for 4 years in the National Guard. Terry faithfully served his family and was an amazing husband and father to Janet and the kids, always making sure they were loved, provided for and prayed over. He also loved his grandchildren and great grandchildren and was dedicated to praying for them. Terry devoted his life to knowing and serving his Savior. He loved God’s Word and was steadfast in sharing the “good news” of Jesus with everyone he met. He also taught the Bible in every church he attended from college students to seniors. Even at 84 he mentored younger men to know and love God and His Word. Terry was a brilliant and gifted man. He could build or repair anything. He was licensed as a master plumber, builder, electrical contractor, welder, boiler installer and real estate broker. His vast knowledge, skill and experience allowed him to build homes, schools, churches, strip malls, stores, hotels, distribution centers and chemical plants. He worked in MI, OH, KY, CA, FL and the Bahamas. He renovated the Knollwood Country Club, Shrine of the Little Flower and the DIA. His expertise and leadership skills placed him in positions managing large crews and projects as Superintendent and VP including, Kellett Plumbing, FH Martin, Weiland-Davco, Detroit News, Henry Ford Hospital and Pulte Homes. He also owned his own construction company. T. Good was a leader and people followed him and learned invaluable lessons and skills from him. So many people have commented, “he was like a father to me” and “he taught me so much.” Terry also had a love for the outdoors; hunting, boating, swimming and riding motor cycles were all favorite pastimes and he often enjoyed those activities with family and close friends. So many special memories were shared on his boat, the Terry Lynn and at the Deer Camp. Terry was an avid reader with the Bible being his favorite book; he loved it and knew it well and encouraged others to do the same. T. Good was an amazing man to everyone who knew him, but to Janet and our family he was our Sweetie, Dad, Grandpa and Great Grandpa. We will miss him every day but, we’re so grateful we know he’s enjoying heaven today with Jesus and Randy, his son who passed away in 2017. We look forward to the day when we will all be reunited on the other side but, until then we will follow in his footsteps and seek to know and honor the Lord and share Him with a needy world. In lieu of flowers and because of Terry’s love for the Bible, gifts in his memory can be made to ‘GRACE to You,’ a ministry dedicated to “Unleashing God’s Truth, One Verse at a Time.” Gifts in Terry’s memory can be made to GRACE to You in the following ways: • by calling 1-800-554-7223 • by mailing a gift to Grace to You, P.O. Box 4000, Panama City, CA 91412 • or donating online at http://www.gracetoyou.org Please note with each gift, in Terry Good’s memory. A Memorial Service for Terry will held in the spring of 2021. To leave a message of comfort visit www.youngcolonial.com

The family of Terry L. Good created this Life Tributes page to make it easy to share your memories.