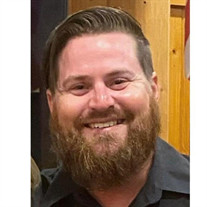 Scott Harris O’Connor, age 33, of Marysville went to be with the Lord on December 1, 2020 after a hard-fought battle with bacterial pneumonia. He was born February 17, 1987 to Jim and Chris O’ Connor. Scott graduated from Marysville High School in 2005. After high school we went on to St. Clair County Community College, following his time at SC4, Scott went on to Northern Michigan University, Marquette. After college, he worked for Spartan Distributers. His whole life Scott was an avid hockey player. That was his passion. He started skating at 2 ½ years old, and with his hard work and dedication to the game he became an exceptional player on the ice. Scott was an avid Notre Dame football and hockey fan. In his spare time, he liked recreational games such as foosball and cornhole, playing his guitar, and throwing the frisbee with his dog, Onni. Scott was a family man, who enjoyed spending time with those close to him. He lived for his daughter, Addison Rose whom he adored and spoiled. He is survived by his daughter, Addison Rose; parents, Jim and Chris O’Connor; siblings, Jesse (Ashley) O’ Connor, Samantha O’Connor; grandparents, Jim and Joyce O’Connor, loving aunts, uncles, cousins, and several other family members and friends. He is preceded in death by his grandparents, Insell and Virginia Harris; godfather, Dennis Delor; aunts, Gail Garza and Janet Knowlton. A memorial service will be held Saturday, December 12th at 12 noon at Young Funeral Home, memorial visitation will be from 9:00 a.m. to 12:00 p.m. prior to the service at the funeral home. Due to COVID-19 guidelines, 25 people will be allowed in the funeral home at a time. For the safety and comfort of others, guests entering the funeral home must wear a mask. Memorials are suggested to the wishes of the family. To leave a message of comfort visit www.youngcolonial.com

Scott Harris O&#8217;Connor, age 33, of Marysville went to be with the Lord on December 1, 2020 after a hard-fought battle with bacterial pneumonia. He was born February 17, 1987 to Jim and Chris O&#8217; Connor. Scott graduated from Marysville... View Obituary & Service Information

The family of Scott Harris O'Connor created this Life Tributes page to make it easy to share your memories.

Scott Harris O’Connor, age 33, of Marysville went to be with...

Send flowers to the O'Connor family.