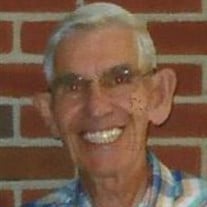 Ronald Max Howison, age 90, of St. Clair, passed away peacefully with his family by his side on Sunday, September 20, 2020. He was born March 12, 1930 in Pontiac to the late Lyal and Idabelle Howison. He was a graduate of Spring Arbor. Ronald married the love of his life, Marian Kolla on December 30, 1950. He proudly served his country in the United States Navy as well as a front-line medic during the Korean War. Ronald worked at River District hospital for 16 years, then he went on and worked for Semco as a supervisor where he retired from in 1993. He was a member of Smiths Creek Bible Church, a lifetime member of the St. Clair American Legion Post 382. Ron also was the Chairman of the board at Flagship Federal Credit Union for many years. In his spare time Ronald enjoyed making clocks, attending his grandchildren’s sporting events, certified taekwondo coach, camping, traveling, and reading. He is survived by his wife of 69 years, Marian; daughter, Karen (Marv) Schneider, daughter in law, Mary Ann Howison; special niece, Laura (Rick) Day; grandchildren, Mike (Dana) Stone, Kristi (Shawn) Francek, Jennifer (Paul) Mattson, Ron (Lisa) Marineau, Katie (Mike) Rifenbark, Edward Howison, Tim (Renee) Schneider, Nicole (Steve) McIntyre, Amy (Mark) Howison, Paul (Samantha) Schneider, Andrew (Haley) Schneider, many great grandchildren, and several nieces, nephews, family members and friends. He is preceded in death by his son, Gary Howison, and brothers, Robert, Nathan, and Calvin Howison. A funeral service will be Friday, September 25 at 11:00 a.m. at Young Funeral Home, China Twp. Visiting hours will be Thursday, September 24 from 2:00-4:00 and 6:00-8:00 p.m. as well as Friday from 10:00 – 11:00 a.m. prior to the service at the funeral home. Memorials are suggested to the wishes of the family. To leave a message of comfort visit www.youngcolonial.com

Ronald Max Howison, age 90, of St. Clair, passed away peacefully with his family by his side on Sunday, September 20, 2020. He was born March 12, 1930 in Pontiac to the late Lyal and Idabelle Howison. He was a graduate of Spring Arbor. Ronald... View Obituary & Service Information

The family of Ronald Max Howison created this Life Tributes page to make it easy to share your memories.

Send flowers to the Howison family.