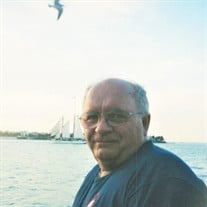 Ronald E. Frantz, 75, Marysville, went home to be with the Lord on October 18, 2020, in St. John's Hospital, Detroit, after a brief illness. He was born in the old St. Clair Hospital in St. Clair on February 18, 1945, and grew up on a small farm on Puttygut Road. He graduated in 1963 from St. Clair High School where he was a talented athlete in football and track. He married Suzanne Wesbrook in 1965. Ron hired into Detroit Edison Company in 1966 and retired in 2003 as shift supervisor in the production department of the Belle River Power Plant. Ron was a man of many talents and interests. His special love was the Great Lakes, particularly the St. Clair River. He was a licensed merchant marine officer and in his retirement was a tug captain on the Lakes, particularly for Malcolm Marine of St. Clair. He was also a licensed private pilot, an avid reader, and there was hardly a thing he could not fix, figure out, or put together. He enjoyed riding his Harley and following the ups and downs of the Detroit Tigers. Ron and Sue had many blessings in his retirement - travels by car and cruise ship, and the special trip in 2015 driving through Sweden, Denmark and Germany. They had a home in Sebastian, Florida, and spent 11 winters there. His two little furry friends gave him a lot of laughs but his special joy were his three great-grandchildren. Ron placed his life's hope in Jesus Christ as his savior, and lived out his faith. He was an active member of Immanuel Lutheran Church, St. Clair, and had served on the Trustee Board. Ron is survived by his wife of 55 years, Suzanne; three sons: Keith (Tracey), St. Clair; Ronald Paul (Rachel), China Township, and Matthew Frantz, Casco Township; daughter Mary-Beth (Kevin) Fleury, Port Huron; seven grandchildren: Samantha (Anthony) Gedvick, Kyle Frantz, R. J. Frantz, Kathleen Frantz (Matt Redden), Daniel Fleury, Lucas Fleury and Lynette Frantz; three great-grandchildren: Jaxson Frantz and twins Grayson and Alora Redden; brother Kenneth (Kathy) Frantz, Howard City, Michigan; three sisters, Gayle (Marvin) Buckingham, Howard City; Vickie (Wayne) Smith, Sabattus, Maine, and Alaina (David) Ingles, St. Clair; sister-in-law Terrill Rolfe (Tom Gauden), Wilmington, Ohio; mother-in-law Caroline Wesbrook, also of Wilmington; special cousins Tom and Sue Huff, and many other nieces, nephews and cousins including the Frantz-Malcolm clan. He was preceded in death by his parents, Shirley B. and Vera Stanley Frantz and brother Bruce Frantz. Visitation will be 5-8 Tuesday October 20th and 2 – 8 Wednesday, October 21st at Young Funeral Home on St. Clair Hwy. Due to Covid-19, the funeral service for Ronald is private for family only. Burial will be in Rose Hill Cemetery, East China Township. Memorials to the Straight Path Ministry care of Immanuel Lutheran Church in St. Clair would be appreciated in lieu of flowers. “And God shall wipe away all tears from their eyes and there shall be no more death, neither sorrow nor crying, neither shall there be any more pain, for the former things are passed away.” Revelation 21:4

The family of Ronald E. Frantz created this Life Tributes page to make it easy to share your memories.

Send flowers to the Frantz family.