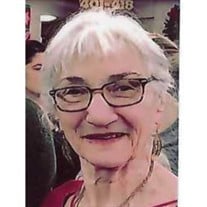 Roberta Wachtel, age 83, of Richmond, passed away peacefully on April 16, 2022, after a long, full life lived. She was born December 13, 1938, to the late Sidney and Esther Samet. Roberta was raised in Waco, Texas where she graduated high school. Following high school, she went on and received her bachelor’s degree in nursing from Texas Women’s University. Roberta took great pride in being raised in Texas and having that tough “Texan” mentality. Following nursing school, she moved to Michigan where she started working in the Emergency Room at a hospital in Detroit. After several years of working in the ER, Roberta moved on and eventually would serve in various fields in the nursing industry. From teaching nursing classes, OBGYN, substance abuse, eventually she finished her career serving private duties, retiring at age 75. She always had to keep busy, aside from work and being a mother, Roberta owned and raised horses. She enjoyed music, as well as art, she developed a hobby in painting. She was a tough, independent woman. She owned motorcycles, four-wheel drive trucks, and always carried a pistol in her coat pocket. Roberta had an admirable work ethic, who was a great provider to her family. She is survived by her children, Shawn (Donna-Smith) Wachtel, Anita Witt, Anthony (Patricia) Wachtel; grandchildren, Sarah (Joshua) Shannon, Joshua Wachtel; great grandchildren, Isabella, Olivia; and nieces, Esther Smith, Shelia Kiani. She is preceded in death by her sister, Miriam Smith. A funeral service will be held on Wednesday, April 20 at 1:30 p.m. at Young Funeral Home, China Twp. Visiting hours will be from 10 a.m. to 1:30 p.m. on Wednesday prior to the service at the funeral home. Out of respect for Roberta, the family asks that guests wear proper attire when attending the services. Interment will be at Rosehill Cemetery, East China. To leave a message of comfort visit www.youngcolonial.com

Roberta Wachtel, age 83, of Richmond, passed away peacefully on April 16, 2022, after a long, full life lived. She was born December 13, 1938, to the late Sidney and Esther Samet. Roberta was raised in Waco, Texas where she graduated high school.... View Obituary & Service Information

The family of Roberta Wachtel created this Life Tributes page to make it easy to share your memories.

Send flowers to the Wachtel family.