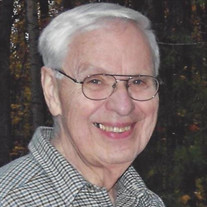 Robert “Bob” Netter, age 89, of St. Clair peacefully went to be with the Lord on Friday, August 21, 2020. He was born October 28, 1930 to the late Cecil and Valeska Netter. Bob graduated from St. Stevens High School with honors in 1948. After high school, he graduated from the University of Detroit with a degree in mechanical engineering. Following college, Bob worked as an engineer in quality control for Chrysler for 35 years. Bob went on to work for Grace Engineering, Memphis, MI for 20 years. His love for his job and the people with whom he worked was the reason he didn’t fully retire until age 85. He married the love of his life, Barbara Fisher on May 7, 1955. Bob was true to his faith; he was a member at St. Mary’s Catholic Church, St. Clair, where he served as an usher for many years. He was also very active in St. Vincent DePaul, where he proudly started a scholarship fund. In his spare time Bob liked to design, build and work on his own projects. Bob was a wordsmith; he had many one liners, and always had a comeback. He loved ice cream. He would frequently say, life’s too short, eat dessert first. Bob will forever be remembered as an honest man who always put others' needs before his own. His hard work, creativity, and precision made him great at his career. His quick witted, funny, caring personality made him a great role model for his children, who will carry out his legacy. His was a life well lived. He is survived by his loving wife of 65 years, Barbara; children, Tom (Julie) Netter, Chris (Cherry) Netter, Mary Jo Curtis, Julie (Ray) Jorgensen, Matthew (Ana) Netter; grandchildren, Lindsay, Jonathan, Andy, Matt, Dan, Genevieve, Emily, Brian, Michael, Danielle, Lydia, Curtis, Joel, Claire; 6, soon to be 7 great grandchildren, as well as many special family members, friends, and neighbors. He is preceded in death by his sister, Betty Privette. Cremation arrangements with Young Funeral Home, China Twp. A Memorial Mass will be Friday, September 11th at 11am at St. Mary’s Catholic Church, St. Clair. Memorials are suggested to St. Vincent DePaul, St. Mary’s Catholic Church, or Blue Water Hospice. Visit www.youngcolonial.com to leave a message of comfort or visit your local ice cream parlor. Have a scoop and remember Bob!

The family of Robert "Bob" Netter created this Life Tributes page to make it easy to share your memories.

Send flowers to the Netter family.