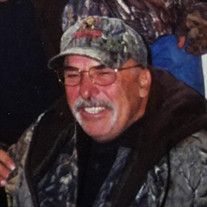 Robert M. Hoogerhyde, family and friends called him Mike, age 77, of Columbus Twp., passed away November 17, 2020. He was born July 25, 1943 in Detroit to the late Robert A. and Anne E. Hoogerhyde. Mike proudly served his country with the U. S. Marine Corps. He enlisted in 1961 and was stationed at El Toro, California and also spent a short time out of the country. He also represented the Marines Corps as a boxer and was honorably discharged in 1965. Mike also enjoyed racing cars. Once returning home he received his pilots license and enjoyed flying to Bois Blanc Island. That is where he taught his children to hunt and fish. Mike has 5 children the oldest is 54 and the youngest is 13. Mike loved his children and tried to help them whenever they asked. His sons all worked for him at some point with R.M.H. Building Co. He is survived by his wife of 33 years, Mary E. (DeSot) Hoogerhyde; children, Robert M. (Audrey) Hoogerhyde of Ocala, Florida, Timothy (Stacy) Hoogerhyde of Dearborn, Mich., Deanna Surbrook of West Branch, Mich., Kristopher K. (Nikki) Hoogerhyde of Armada, Mich. and Rebecca M. Hoogerhyde of Columbus Twp., Mich.; grandchildren, Tiffany (Dan) Duchene of Marine City, Michael M. (Kathy) Hoogerhyde of Kansas, Bill (Danielle) Hoogerhyde of Lincoln, Mich., John (Shandy) Hoogerhyde of Ocala, Florida, Crystal Hoogerhyde, Jason (Jenny), Lauren, Kaitlyn, Heather and Rene Hoogerhyde, Mayson, Donovan and Nicholas Hoogerhyde, Matthew, Zachary, and Tyler Surbrook; great grandchildren, Haley and Calob Duchene, Michael and Adalyn Hoogerhyde, Tonya, William, JR and Ryder Hoogerhyde and Leighann Hoogerhyde and his brother, Carl (Pat) Hoogerhyde of Charlevoix, Mich. In addition to his parents, Mike was preceded in death by his brother, John Hoogerhyde of Clawson, Mich. Mike suffered from Parkinson’s Disease for 12 years. He lived through many accidents, but died from complications of the Covid-19 virus. Mike you will be missed by everyone who knew you. Thank you for everything you have done for me and your family and friends. Rest in peace. To leave a message of comfort visit www.youngcolonial.com

Robert M. Hoogerhyde, family and friends called him Mike, age 77, of Columbus Twp., passed away November 17, 2020. He was born July 25, 1943 in Detroit to the late Robert A. and Anne E. Hoogerhyde. Mike proudly served his country with the U.... View Obituary & Service Information

The family of Robert "Mike" Hoogerhyde created this Life Tributes page to make it easy to share your memories.

Send flowers to the Hoogerhyde family.