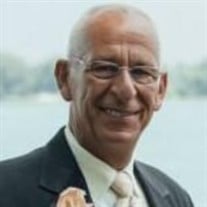 Richard Yates Frickert “Rick” of Marine City, MI. Passed away June 23rd, 2020. He was born on May 18th, 1956 in Bucks County, Pa to Richard and Barbara Frickert. He was the middle of their three children which included sister Ann and brother Tad. On October 11th, 1983 he married his loving bride, Julia Ann Smith. Together they had a son, Richard and a daughter, Rebecca. Rick served in the United States Navy from 1973 to 1979. He was a retired Carpenter from Local 1067. Rick was an avid trap shooter and very active in the local shooting community. He was a life member of St. Clair Hunt and Fish Club and also a member of Richmond’s Sportsmen’s Club. Rick and Julia made many fond memories together; always pushing each other to make the next shoot off and win the next belt buckle. Rick dedicated many hours teaching youth to shoot, and instilling the same passion he had for the outdoors in others. Rick loved to cook for, and spend time laughing, with his family and dear friends. When he cooked, he could make any day a “good food day.” Rick also loved spending time with his close friends and neighbors in Cherry Beach. In all his life accomplishments, the things he was most proud of were his children and welcoming into the family his son-in-law and daughter-in-law. Rick is survived by his wife Julia Frickert, Son, Richard (Angela) Frickert, Daughter, Rebecca (Michael) Tenyer, Sister, Ann (Kip) Stadnicki, Brother, Tad (Julie) Frickert, mother, Barbara and Niece, Chelsea (Mitch) Dinowitz. He was preceded in death by father Richard Frickert, and in-laws Jack and Lovell Smith. A memorial service will be held Friday June 26, 2020 at 3:00 p.m. at Young Funeral Home, China Twp. with visiting from 12:00 p.m. till time of service. To leave a message of comfort visit www.youngcolonial.com

Richard Yates Frickert &#8220;Rick&#8221; of Marine City, MI. Passed away June 23rd, 2020. He was born on May 18th, 1956 in Bucks County, Pa to Richard and Barbara Frickert. He was the middle of their three children which included sister Ann... View Obituary & Service Information

The family of Richard Yates Frickert "Rick" created this Life Tributes page to make it easy to share your memories.