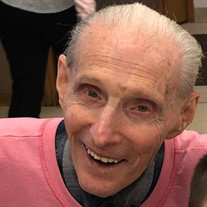 Richard B “Butch” Butcher went home to be reunited with his bride on May 29, 2020. He was known by many when he worked at the Algonac A & P, or for supplying the local kids toilet paper for Devil’s Night. Butch retired from A & P and enjoyed his time as a Dyck Security Guard at Port Huron Hospital. At 83, Butch had endless energy. He was a giver, he lived to serve, and was always taking care of others. He was well known for his care for people that would come to the hospital, and for his dedication as a volunteer Kimball Township fire fighter. Richard was an avid reader and had a thirst for knowledge up until his final days. Richard was born in Detroit on August 3, 1936 to Richard and Evelyn Butcher. He married Dolores “Carey” Ciaravino, “the love of his life” on May 12, 1956. Butch and Carey lived in Detroit until 1969 when they moved to Smiths Creek to raise their children. They moved to Marysville in 1984 to enjoy life together when their children left the nest! Richard’s family is devastated by his sudden passing, and will miss him so much. He is survive by 5 children; Ricka (Dr. William) Mathews, Cyndy (Larry) Raymo, Lisa (David) Kubel, Daniel Butcher and Karen Butcher, and Pam (Dennis Roy) Yelencich. Richard loved his family. He has 10 grandchildren; Sarah (Brian Swenson) Dean, Melissa (Greg) Moore, Leah Raymo, Michael (Seairah Bradley) Kubel, Daniel Kubel, Adam (Alexandra Slankard) Butcher, Joshua Butcher, Chad (Christina) Yelencich, Erica (Bill Biskey) Yelencich, and Andrew (Emily) Yelencich. Richard has 12 great grandchildren; Cameryn, Liam, Ivy, Aiden, Toby, Landon, Owen, Annabelle, Connor, Cecilia, Alice, and Emmaline Is joining the family after her "Oochie" passed. Richard was preceded in death by many loved ones, including his wife Dolores and our sweet Jessica Lynn Clemente. Richard lived to serve others and the family will be holding a Celebration of Life at a later date. Memorials may be made to the wishes of the family. To leave a message of comfort visit www.youngcolonial.com

Richard B &#8220;Butch&#8221; Butcher went home to be reunited with his bride on May 29, 2020. He was known by many when he worked at the Algonac A & P, or for supplying the local kids toilet paper for Devil&#8217;s Night. Butch retired from... View Obituary & Service Information

The family of Richard B. "Butch" Butcher created this Life Tributes page to make it easy to share your memories.

Richard B “Butch” Butcher went home to be reunited with his bride...

Send flowers to the Butcher family.