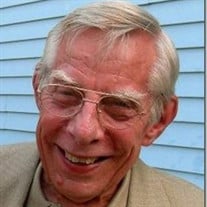 Philip Arvon Dersam, age 77, of St. Clair, passed away April 18, 2020. He was born in Detroit, Michigan on December 27, 1942 to the late Edward and Virginia (Weiler) Dersam. He graduated from Lowery High School in 1960 then proudly served in the US Army with the Corp of Engineers. Phil then continued his education at Oakland University and graduated with a degree in engineering. He married Sandra Kay Farris on May 27, 1967 and became the proud father of two children, Mark Robert and Sandra Lynn. Phil was a “Jack of all trades” and very artistic and creative. He loved restoring pedal cars and working on his beloved 1947 hot rod “WildfireFord’. He liked to relax with his son fishing on the St. Clair River but his greatest pleasure in life was any time spent with his family; his children, grandchildren and his great grandchildren. In 2007 Phil was diagnosed with a genetic condition Alpha 1 Antitrypsin Disease, which left him with only 47% lung capacity. When he was given the diagnosis his words were “this is not going to keep me from doing the things I love to do with my family” and for the most part it didn’t, until the last few years when he couldn’t quite keep up with all the things he loved to do. He didn’t complain and considered himself blessed because with his treatments he could live a productive life. He is preceded in death by his daughter, Sandra Lynn Corden, his parents, and his two sisters. He is survived by his wife Sandy, son Mark, grandchildren, Katie (Corden) Davis, Matthew (Alyson) Dersam, Luke Corden, great grandchildren Nathan, Brendan, Cayden and Delilah Davis, Brooklynn Bowlin, Brody and Tegan Dersam and his beloved dog Molly, his constant companion. Memorials may be made to SNAP. Cremation has taken place and a memorial service will be held at a later date. To leave a message of comfort visit www.youngcolonial.com

Philip Arvon Dersam, age 77, of St. Clair, passed away April 18, 2020. He was born in Detroit, Michigan on December 27, 1942 to the late Edward and Virginia (Weiler) Dersam. He graduated from Lowery High School in 1960 then proudly served in... View Obituary & Service Information

The family of Philip Arvon Dersam created this Life Tributes page to make it easy to share your memories.

Send flowers to the Dersam family.