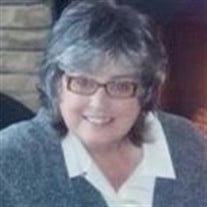 Patsy (Burnette) Bowers of East China, Michigan formerly of Bryson City, North Carolina, passed away peacefully at home with her loved ones, April 24th, 2022. Patsy was the youngest daughter of the late Rev. Jay and Mrs. Ruth Burnette of the Alarka Community, loving wife of 43 years to the late Robert Eugene Bowers-dearest baby sister to Betty (LD) Shuler and Kenneth (Pat) Burnette. The best little 5'3" momma to her girls, Gena (Tim) Makowski, of Chicago, Illinois, Shannon (Jeffrey) Vaughn of Southgate, Michigan, and Robyn (John) Rezny of East China, Michigan. Her favorite title was Gramz, she leaves behind her pride and joy's- 8 grandchildren, 12 great-grandchildren and three faithful protectors Harley Quinn, Amos Moses and Rupert Dudley of the home. Patsy was preceded in death by her parents, husband and sister Annette Waldroup, great-grandson Robert Jeffrey Patrick Chandler, and coffee pardner Josephine Moore. Patsy was born December 18, 1950 in Bryson City, North Carolina and raised there and Alarka, North Carolina. She was spoiled, not only by her parents but her older sisters and brother as well. Patsy met the love of her life at Mt. Vernon Freewill Church. She didn't like him, he was mean and pulled her pig-tails. She fell in love and married in Wahalla, South Carolina on December 21, 1968. Patsy had a larger than life personality, with her no nonsense attitude it was the perfect recipe for her little stature- she was quick witted, and gave the best advice and counsel to anyone who asked or didn't ask -that was Patsy. Patsy could "sang" learning at an early age from her mama and grandpa Zeke Green, she sang with her sisters and later with best friends- with the East Alarka Quartet, her tenor was top notch and unbeatable. Man, could she get that low end alto when needed-effortlessly- Patsy taught her daughters how to sing also, it was said her weekend punishments consisted of washing walls and harmonizing to the old red hymn book, 3 girls couldn't fight when singing gospel, she would tell them. She loved to hear her girls sing, and they sang her home. Patsy had a voice and charisma so it was no surprise to the family when asked by the nursing home where she worked at if she could DJ. She always started her show with "Boot Scootin' Boogie" by Brooks and Dunn and often picked up the mix to sing along with Patsy Cline and Tammy Wynette. Her granddaughters kept her young, she was first in line for the early sale of Twilight tickets, no one was even surprised when she threw down some rhymes with Tupac- "I ain't mad a cha." Cheap Chinese and school clothes shopping was the highlight of her summers. The caddy was always filled with a grandchild or three for yard sale Saturdays and any trip to North Carolina. She loved playing board games, cards, and her favorite was jigsaw puzzles- in which her husband lovingly teased she cheated at; she was an avid reader and would curl up with a hot cup of black coffee and a crime novel, and enjoy her time in another world. She enjoyed her flowers, aside for her allergies, Spring was her favorite time of year with all the pretty blooms- second to the fall color of the Smoky Mts. Patsy was always the boss- she was the boss of the kitchen whether cooking or not always telling Robyn it needed more salt. She was the boss at the housekeeping with her eagle eye and could spot a speck of dust 300 paces. Patsy was always dancing through the house, later in years a motorized scooter would allow her to play pinball with the appliances and furniture. She enjoyed dining out and the occasional Margarita. She never turned down the chance to binge watch Big Bang Theory or Supernatural- Patsy made sure there was never a dull moment- laughter was always the best medicine and she kept her girls laughing and on their toes until the end. Patsy is loved by so many and will be missed until each one of her beloved are called home. Cremation arrangements have been entrusted to Young Funeral Home, China Twp. Private family services will be held at a later date.

Patsy (Burnette) Bowers of East China, Michigan formerly of Bryson City, North Carolina, passed away peacefully at home with her loved ones, April 24th, 2022. Patsy was the youngest daughter of the late Rev. Jay and Mrs. Ruth Burnette of the... View Obituary & Service Information

The family of Patsy Mae Bowers created this Life Tributes page to make it easy to share your memories.

Send flowers to the Bowers family.