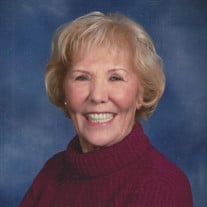 Muriel Likins-Silvas, age 86, of St. Clair, passed away peacefully in her home on November 15, 2020. She was born July 13, 1934 to Louise and Ronald Passey in Smiths Creek, later they moved to Memphis, Michigan. Muriel was preceded in death by her sisters, Mary Lou Gronek in 2002 and Janet Bradley in 2018. Muriel graduated from Memphis High School in 1952 and was very active in sports including basketball, cheerleading and drum majorette for four years. She married her high school sweetheart, David F. Likins, in 1954. They loved spending time at their cabin up north and traveling. They enjoyed 34 wonderful years together until his death in 1988. They had two sons, William Ronald of Port Huron and John David (Jeannette) of St. Clair. Six grandchildren, Joshua (Kim) Likins of Goodells, Jeanne (T.J.) Watkins of Marysville, Aubrey (Tony) Williams of Jenison, MI, Jessica Likins of Grand Rapids and Jarred and Kara Likins of St. Clair; eight great grandchildren, Hunter, Hattie, Henley, Harlee Likins, Lila and Lincoln Watkins, Jackson and June Muriel Williams; cousin Judy Semp of Warren and several nieces and nephews. Muriel enjoyed her career in radiology, she graduated in 1954 as a Registered Radiologic Technologist and was a member of A.R.R.T. and A.S.R.T. She worked 36 years spending the last 23 years of her career as Director of Radiology at St. John River District Hospital and retired in 1991. Muriel married Gerald C. Silvas in 1991, they spent their winters in Las Vegas and he taught her the game of golf, which she truly loved and became an avid golfer. She was a member of TPC Summerlin, Sun City Summerlin Las Vegas and the St. Clair Golf Club. Gerald died in 2011. Muriel enjoyed her many great friends, both in Las Vegas and St. Clair. Most of all she had a very loving and caring family she was always grateful for. On behalf of the Likins family we invite you to gather Tuesday, July 13th, 12:00 to 3:00 p.m. at the St. Clair Golf Club, to share our favorite memories, stories, to laugh, to cry, and remember a wonderful person who is greatly missed. Memorials may be made to St. Clair High School Girls Golf. Arrangements by Young Funeral Home, China Twp. To leave a message of comfort visit www.youngcolonial.com

Muriel Likins-Silvas, age 86, of St. Clair, passed away peacefully in her home on November 15, 2020. She was born July 13, 1934 to Louise and Ronald Passey in Smiths Creek, later they moved to Memphis, Michigan. Muriel was preceded in death... View Obituary & Service Information

The family of Muriel Likins-Silvas created this Life Tributes page to make it easy to share your memories.

Send flowers to the Likins-Silvas family.