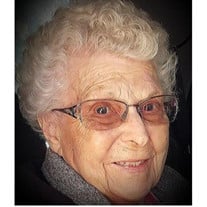 Mona May (McClary) Mann, age 92, passed away peacefully surrounded by family on Sunday, August 23rd, 2020. She was born on August 25th, 1927 in Dearborn to the late Virgil and Amy McClary. Mona lived all over the state, including Onaway, Utica, Franklin Hills, Redford, and St. Clair. She married George Milian in 1946, who preceded her in death in 1996. Mona married Kenneth Freel Sr. in 1948, who preceded her in death in 2009. She married Thomas Wilt in 1965, who preceded her in death in 1977. She then married James Mann in 1979, who preceded her in death in 1994. Mona worked at the Franklin Hills Country Club for 25 years. She loved to travel, especially with her mother, Amy. In Mona’s 92 years she visited every state in the country except Alaska. Around the house, she would often use the phrase, “Have car will travel”. She enjoyed reading, and had many books around her house. Mona was an animal lover who cared for many dogs and cats throughout her lifetime. She enjoyed big band music, country music, dancing, puzzles, sudoku, and old movies. She was a lady true to her faith, who loved her church. She liked to cook, always making delicious meals. Mona loved Christmas and having the house full on the families traditional Christmas Eve celebrations. She especially loved her family; her children, grandchildren, great grandchildren, and great great grandchildren. But most of all, she just loved with her big heart. She is survived by her children, Karen Rae Baur, Oren Freel, Monica (Glen) LaMontagne, Patricia (Bill) Svoboda, Christopher (Jim) Mann, David (Monica) Borden, James (Heather) Mann, 20 grandchildren, many loving great, and great great grandchildren. She is preceded in death by her children, Carol Jean (Al) Klingensmith, Kenneth Freel Jr., Frank (Laurice) Freel, Lori Borden, Charles (KC) Mann; siblings, Genevieve Vartanian, Shirley Thomas, Jean Cole, Oren McClary, and Clayton McClary A funeral mass will be Friday, August 28th at 10:00 a.m. at St. Priscilla Catholic Church, 19120 Purlingbrook Street, Livonia, MI 48152. Visitation will be Friday from 9:30 a.m. to 10:00 a.m. at church prior to mass. Following mass the family invites guests to join them for luncheon and fellowship at Buca di Beppo, 38888 6 Mile, Livonia, MI 48152. Memorials are suggested to St. Jude’s Children’s Research Hospital. To leave a message of comfort visit www.youngcolonial.com

Mona May (McClary) Mann, age 92, passed away peacefully surrounded by family on Sunday, August 23rd, 2020. She was born on August 25th, 1927 in Dearborn to the late Virgil and Amy McClary. Mona lived all over the state, including Onaway, Utica,... View Obituary & Service Information

The family of Mona May (McClary) Mann created this Life Tributes page to make it easy to share your memories.