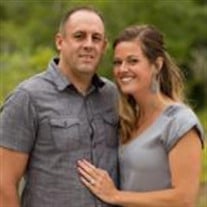 On August 25, 2020, Michael Paul Chipman (40) and Keri Ann Chipman (37) of Cottrellville Township, MI went to be with the Lord resulting from a car accident in Cottrellville Township. Mike and Keri started dating in 2003 and were married on August 24, 2007. They valued their marriage above all, making time to connect and have fun together. Keri brought her passion and fire for life while Mike brought his calm and cool approach making them a dynamic duo. Mike was the son of Robert and Kimberly Chipman of Chesterfield. Mike graduated from Lakeview High School in 1998 and was an Eagle Scout, who proudly worked his way up to being a master scout in Marine City. Following high school he went to Michigan Tech and graduated in 2002. During that time, Mike went to work for Ford Motor Company as an Engineer for the past 14 years. He earned his MBA from Wayne State University in 2006. Mike was a loving husband and father, an avid car enthusiast, and never missed a chance to participate in a derby or go to a car show. He was also a scout leader and community volunteer, a true man of integrity, and was always being generous with his kindness and resources. Mike was always considering others and added something special to the ordinary. Keri was from Kahoka, MO and is the daughter of David Calamita of Cottrellville, MI and JonAnn Danielson of Chesterfield, MI. She graduated from Chippewa Valley High School in 2001 and earned her BA at Wayne State University in 2008. Keri was a dynamo and wore her heart on her sleeve. She loved her husband and family fiercely. Keri took advantage of business opportunities to sell her handcrafted items, kitchen creations, and boutique clothing allowing her to be in the home with her children and fill the passion she had for entrepreneurship. As the children started elementary school she began to substitute teach at East China School District. Keri made the mundane extraordinary while leaving the impression that it was effortless; as a result, all who encountered her felt loved. Mike and Keri are survived by their beloved children; Ethan (12), Amelia (10), and Lucas (6). Their parents Robert and Kimberly Chipman, JonAnn Danielson, David and Kim Calamita; their siblings Susan and Paul Zakowski and their son Eli; Nicole Calamita, Danielle Calamita, daughter Skylar, and Carley Nichol and her children Braelynn, Thomas and Owen. Grandparents Betty Sawyer, Jim Paine, Janet Snar, Andrea Calamita as well as many special family members and friends. They were preceded in death by brother David Calamita Jr., Grandparents Ernest Calamita, Dorothy Jobst, Gerry Dean Sawyer, Anita and George Chipman, Beverly Graham, and aunt Susan Calamita. Cremation arrangements with Young Funeral Home, China Twp. A memorial mass will be Thursday, September 3rd at 12:00 p.m. at Holy Cross Catholic Church, Marine City. Visiting hours will be Wednesday, September 2nd from 4:00 – 8:00 p.m. at Young Funeral Home. and one hour prior to mass at church on Thursday. For the safety and comfort of others, masks are required to enter the funeral home and church. In lieu of flowers, memorials are suggested to the wishes of the family to go towards a college fund for the children. The family thanks the community for the overwhelming support of love, donations, and many prayers. “Death leaves a heartache no one can heal, love leaves a memory no one can steal” -Unknown To leave a message of comfort visit www.youngcolonial.com

The family of Michael Paul and Keri Ann Chipman created this Life Tributes page to make it easy to share your memories.

Send flowers to the Chipman family.