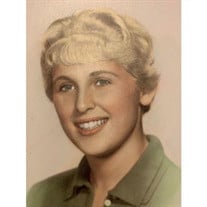 Merian Friederichs, age 78, of East China passed peacefully with her family, and the Lord by her side, Thursday, December 03, 2020, after a long illness. Merian was born on January 08, 1942, in Marine City, Michigan to the late Sam, and Virginia Coomer. Merian graduated from Marine City High School, where she was enjoyed playing the clarinet in the marching band. After High School she graduated from Port Huron School of Cosmetology. She married her loving husband Robert Friederichs May 26, 1962. Merian was a selfless loving lady, whom lived to take care of others for many years, including her parents, husband, children, and grandchildren. She always had a passion for nature, and was an exceptional gardener and cook, for many years she enjoyed fishing, boating and traveling to Tobermory to snowmobile with her husband and many friends and family. She was extremely witty and generously passed down her keen sense of humor to her family. Merian is survived by her Daughter Laurie (Daryl) Conrad, her grandchildren Adam (Jamie) Friederichs, Jaime (Jared) Gillman, James (Emily) Glombowski. Her great-grandchildren, Eric and Adalynn Friederichs and Jesslyn and Josie Mae Gillman. In addition, she is survived by four brothers, Gary (Charlene) Coomer, Glen (Brenda) Coomer, Art (Patricia) Coomer, and sister in-law Virginia Friederichs, as well as many special nieces and nephews. Finally, she is also survived by her silly loyal dachshund Wally. Merian is preceded in death by her son Robert Friederichs, her grandson Eric Friederichs (Huelskamp), her brother Larry Coomer, and Kenny (Sherry) Coomer, brother in-law Andrew Friederichs, and the father of her grandchildren James D. Glombowski. Merian has chosen to be cremated and buried next to her son, and parents in Smiths Cemetery in Cottrellville township. Cremation Arrangements have been made by Young Funeral Home. A celebration of life will take place on Sunday June 13th 2021 at 2:00 p.m. with dinner immediately following at South Eastern Michigan Conservation Club, 2402 North Belle River Road, Marine City.

Merian Friederichs, age 78, of East China passed peacefully with her family, and the Lord by her side, Thursday, December 03, 2020, after a long illness. Merian was born on January 08, 1942, in Marine City, Michigan to the late Sam, and Virginia... View Obituary & Service Information

The family of Merian Friederichs created this Life Tributes page to make it easy to share your memories.

Send flowers to the Friederichs family.