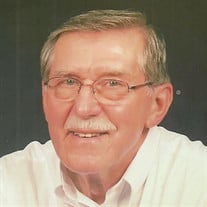 Melvin Herbert Hearit, 81, went home to Jesus on April 2, 2021. Mel was born to the late Herbert and Minnie (Pleiness) Hearit on August 6, 1939 in Bloomfield Twp., Huron County, Michigan. His sister, Marilyn Scott, brother-in-law, William Scott, and brother, Herman Charles Hearit, preceded him in death. On August 13, 1960, Mel married his high school sweetheart, the love of his life, Priscilla Landra. He is survived by his wife, Priscilla; their three children, Kim (Mike) Hurst of Shelby Twp., Karen (Don) Distelrath of Columbus Twp., and Kevin (Susan) Hearit of Lapeer; and seven grandchildren, Ashley, Nikki, Emily, Ethan, Stephanie, Kyle, Briana; and two great-grandchildren, Micah and Louis. He worked for the Detroit Police Department for 25 years, retiring in 1988. He then worked in security for Harper Hospital-Detroit, Macomb Hospital, and at the Macomb County Courts until he retired in 2019. Mel is remembered as a kind-hearted man that loved to help his children and grandchildren. His family was very important to him and he will be deeply missed. He also was a talented craftsman who enjoyed making birdhouses, flower boxes, and other wood projects. He enjoyed fishing, cutting firewood, playing Euchre with his friends from church, and spending time with his best friend Camie, his Golden Retriever. He was a member of St. Peter’s Lutheran Church in Richmond, Michigan. Mel was a man of strong faith and he was not afraid to share it – one of his favorite Bible verses was Proverbs 16:3. Memorial service will be held at 11:00 a.m. Monday, April 12, 2021 at St. Peter’s Lutheran Church in Richmond, MI by Reverend Mark Haller. The family will receive visitors one hour prior to the service. The service will also be live streamed at https://www.stpetersrichmond.org/ and on Facebook at https://www.facebook.com/stpetersrichmond. Any donations or memorials can be made to St. Peter’s Lutheran Church in Richmond, MI online at https://www.kindridgiving.com/app/giving/stpetersrichmond. Funeral arrangements by Young Funeral Home, China Twp. To leave the family a message of comfort please visit: www.youngcolonial.com

The family of Melvin H. Hearit created this Life Tributes page to make it easy to share your memories.

Send flowers to the Hearit family.