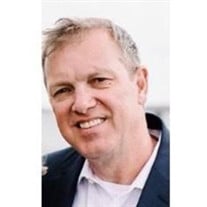 Martin Bruce VanBuskirk, 62 years old, of St. Clair passed away peacefully at home surrounded by his loving family after a long and strong fight against cancer. He was born in St. Clair on Sunday, August 9, 1959, the son of the late Donald and Eleanor (Procure) VanBuskirk. He married Leanne Bradley on June 1, 1984. He was a 1977 graduate of Port Huron Northern. He worked for 43 years at Detroit Edison, where he began his career as an operator. In 1981, he bid into maintenance where he was a North Area Handyman. He received an apprenticeship in 1985 at Belle River Power Plant as a Millwright. From 2000 until his retirement in 2021, he worked in the Turbine Group, where he was a Head Union Steward for many years. Marty was a dedicated employee, a cherished coworker, and friend to all. Marty was an avid sports fan, always cheering on his children/grandsons, the Michigan Wolverines and Detroit sports teams. He wholeheartedly enjoyed Michigan summers. In his earlier years you could find him on a baseball diamond, and he was a member of the Be No Boomers softball team. As the years progressed, he transitioned to a golf course. He achieved two hole-in-ones in his golfing career, at The Port Huron Elks Club and at Gull Lake Course. He especially enjoyed walking Pine Shores Golf Course, where he got an Albatross on hole number 4 by scoring a 2 on a par 5. He also enjoyed driving his wife, family and friends in their pontoon boat on the St. Clair River, or simply sitting on their dock fishing. Marty had a zest to enjoy life and always found the good in life. Surviving in addition to Leanne, his wife of 37 years, are his three children: Ryan (Mandi) VanBuskirk, Derek (Emily) VanBuskirk, Joy (Bobby) Goeschel. His six grandsons: Landon, Bennett, Drake, Bowen, Jack, and Crew. His three brothers and sister, Robert VanBuskirk, Pamela (Mike) Ranshaw, Tim (Chris) VanBuskirk, Mark (Julie) VanBuskirk. His mother-in-law, Bonnie Bradley, and his brother-in-laws, Tod and Ty Bradley. In addition to many beloved nieces and nephews and great niece and nephews. He is preceded in death by his older brother, Ken VanBuskirk, and nephew, James VanBuskirk. In addition to many beloved aunts and uncles and his father-in-law, Sid Bradley and sister in-law Robin Bradley. His family will honor the memory of Marty with a visitation on Thursday, December 16th from 2-8pm and a funeral service on Friday, December 17th beginning at 11am with visiting from 10am until time of service, all services will be held at Young Funeral Home, China Twp. Memorials may be made to wishes of the family with Memorial funds being used to support local athletic programs and children. To leave a message of comfort visit www.youngcolonial.com

Martin Bruce VanBuskirk, 62 years old, of St. Clair passed away peacefully at home surrounded by his loving family after a long and strong fight against cancer. He was born in St. Clair on Sunday, August 9, 1959, the son of the late Donald and... View Obituary & Service Information

The family of Martin Bruce VanBuskirk created this Life Tributes page to make it easy to share your memories.

Send flowers to the VanBuskirk family.