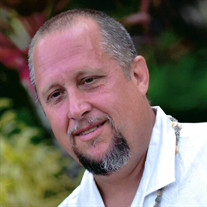 Mark Alan Ketterer, age 58, of Cottrellville Twp., received the ultimate promotion on January 19, 2022. He was born July 16, 1963, to Anita and the late Paul Ketterer. Mark married Aundria Campbell on November 11, 2000. Mark began work when he was 13 years old in working for a marina. He took pride in his work ethic. Mark began in the machine business when he was 18 years old. Through hard work and dedication, he worked his way up to a management position with RockTech. Even when he wasn’t working, he was keeping busy. He enjoyed woodwork. He would build anything and everything that he, his family, or friends needed. Mark was an avid outdoorsman, who loved to hunt and fish. He was also a certified NRA CPL instructor. Mark was a man of faith, a devoted Christian, who lived his life by the Bible. He was a generous man, who always put others before himself. He is survived by his wife, Aundria Ketterer; son, Hunter Ketterer; mother, Anita Ketterer; sister, Patricia Fraley, as well as several nephews and a niece. Cremation arrangements with Young Funeral Home, China Twp. A celebration of life will take place Sunday, January 23rd at 7:30 p.m. at Young Funeral Home, China Twp. Visiting hours will be Sunday from 2:00 p.m. to 7:30 p.m. prior to the service at the funeral home. In lieu of flowers, the family suggests memorials be made out to the Tunnels to Towers Foundation https://t2t.org/ or the Wounded Warriors Project https://www.woundedwarriorproject.org/ To Leave a message of comfort visit www.youngcolonial.com

The family of Mark Alan Ketterer created this Life Tributes page to make it easy to share your memories.

Send flowers to the Ketterer family.