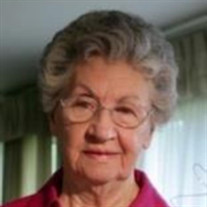 Margaret Ann Nichols, age 96, passed away October 7, 2020. She was born in Marine City, at her family home on Carrol Street, on May 18,1924 to Clement and Margaret (Babel) DeLude. She was a lifetime member of Holy Cross Catholic Church in Marine City. She graduated from Holy Cross High School in 1942. Following graduation she worked nights for a year at the Detroit Gasket Company. Having saved enough money she moved to Port Huron and attended the Port Huron School of Cosmetology. After becoming a licensed hairdresser Ann, as everyone called her, worked as a beautician at Kay’s Beauty Shop in Marine City. In 1942 she met her future husband, Ralph Nichols. They were married on June 15, 1946 at Holy Cross Church and on June 15, 2016 they celebrated 70 years of marriage in that same church. Ann was an active member of the Holy Cross Parents group, volunteering for various school and church events. She was a 50 plus year member of the Daughters of Isabella Circle 419 where she served as treasurer for several terms. Ann truly embodied the Daughters of Isabella motto of Unity, Friendship and Charity. Her legacy of unwavering faith, volunteer work, gentleness and quiet ways will always be a shining example for her family. She was lovingly referred to as the “Queen of Desserts” by her family and “Sweet Ann” by her friends. She is survived by her son; Larry (Pat) Nichols, daughters; Amiee (Joe) Distelrath, and Therese (Tim) Witherspoon, grandchildren; Kristi (Nate) Shopbell, Kelly (Damian) Starr, Sarah (Jon) Davidson, Matt (Rachel) Distelrath, Jessica Distelrath, Mary Witherspoon and John Witherspoon, great- grandchildren; Parker, Lincoln, Libby, Brynn, Miriam, Gloria, Norah, Sadie and Cecelia. She is also survived by her sister; Rosemary Rood, sister-in-law Helen DeLude and many nieces, nephews and extended family. She was predeceased by her husband Ralph in 2016, and siblings; Charles DeLude, Catherine Etz, John DeLude and Bernard DeLude. Funeral mass will be held at 12:00 p.m. on Wednesday, October 14 at Our Lady on the River Parish, Holy Cross Catholic Church, Marine City. Visitation will be at church one hour prior to mass. Face coverings are required. Interment will follow at Holy Cross Cemetery, Marine City. In lieu of flowers, memorials are suggested to the Fr. Al Sadler Memorial Fund. Arrangements by Young Funeral Home, China Twp. To leave the family a message of comfort please visit: www.youngcolonial.com

Margaret Ann Nichols, age 96, passed away October 7, 2020. She was born in Marine City, at her family home on Carrol Street, on May 18,1924 to Clement and Margaret (Babel) DeLude. She was a lifetime member of Holy Cross Catholic Church in... View Obituary & Service Information

The family of Margaret Ann Nichols created this Life Tributes page to make it easy to share your memories.

Send flowers to the Nichols family.