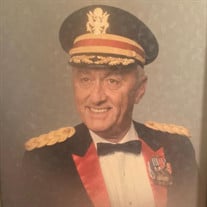 Maj. John W. Barry USA (Ret.) 90, passed away at his home surrounded by family on January 9, 2021. He was born in Pittsburgh on October 28, 1930. The son of the late John and Gladys Barry. He joined the Army in 1952 and was a career officer retiring in 1972. He earned his aviation wings in both rotary and fixed winged aircraft. He fought in the Korean and Vietnam conflicts as a Huey Helicopter Captain and a founding member of the Cooperheads, earning over 20 medals of honors, including the Bronze Star, (2) Distinquished Flying Crosses with Oak Leaf Clusters and a Purple Heart, Upon retirement from the Army he worked at Prestolite and Port Huron Schools retiring in 1999 and was a VFW Life Member and American Legion Post 449. He loved traveling, telling stories and spending time with family and friends. He is survived by the love of his life, Victoria, children John(Debbi) Barry, Patti(Steve) Ninneman, Doug(Lisa), Jeff(Alexis) Hadwin, Dan(Elizabeth) Draghiceanu, grandchildren: Guy, John, Mitch Ninneman, Christi, Thomas Barry, Nicole, Brittani, Brett, Scott, Garrett, Reagan, Davis Hadwin and Haley & Aidan Draghiceanu. 13 great grandchildren. Brother in Law John, Nephew John (Leslie) Homer. He was also preceded in death by his brother George and Sister Glady Inurnment will be in Arlington National Cemetery at a later date. Cremation arrangements were provided by Young Funeral Home. Memorials are suggested to Michigan Humane Society. To leave a message of comfort visit www.youngcolonial.com

The family of Maj. John W. Barry USA (Ret.) created this Life Tributes page to make it easy to share your memories.