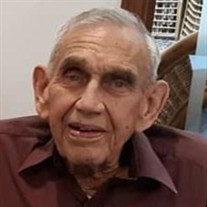 The Lord must have a special building project in Heaven because He called Louis C. Eisen home on March 13, 2020, at the age of 96. Louis was born September 3, 1923, to the late Carl and Albertha Eisen. Louis married Doris Laura Paetzel January 21, 1950. She passed October 20, 2014, following 64 years of marriage. Louis is survived by his children Paul (Grace) Eisen (Richmond), Donna (Greg) Frazier (Westfield IN), Jean Eisen (Louisville KY) and Joan (Art) Tomaszycki (Casco), brothers Rolland, George and Carl Eisen, sister-in-law Dolores Bertossi, 13 grandchildren, 10 great grandchildren with another due soon, and a number of nieces and nephews. In addition to his wife and parents he is predeceased by his sister Karen Eisen, parents-in-law Fred and Louise Paetzel, sisters-in-law Lois, Doris A, and Marlene Eisen, brothers/sisters-in-law Harold and Doris Paetzel and Robert and Bernice Bertossi, nephew Kenneth Eisen, and cousin Ernie and Wilma Bauman. As a child, Louis helped on his parents’ and grandparents’ family farms. After graduating St. Clair High School in 1941, he served during WWII in the US Army where he worked in communications while stationed in Japan. He later sailed the Great Lakes on various freighters. After marrying, he built boats for Chris Craft in Algonac, farmed, and after building his own home and barns he was self-employed building pole barns until he retired in 1985. His largest project was one of the livestock barns at the Armada fairgrounds. Louis was an active lifelong member of St Peter’s Lutheran Church where he served on the council, the building and property committees and chaired the construction of both the parish hall and new church. He was active in the community serving on the St. Clair Township Planning Commission and the Belle River Credit Union in Richmond including supervising the construction of the current office building. After retiring, he and Doris served several years with the ELCA Mission Builders. He enjoyed his grandchildren, farming, and polka dancing with his wife. Private burial has taken place. A Celebration of Life will be held Sunday September 6, 2020 at East China Township Park. Visiting hours are 1:00 to 4:00 p.m. with a service conducted at 2:00 p.m. To leave a message of comfort visit www.youngcolonial.com

The Lord must have a special building project in Heaven because He called Louis C. Eisen home on March 13, 2020, at the age of 96. Louis was born September 3, 1923, to the late Carl and Albertha Eisen. Louis married Doris Laura Paetzel January... View Obituary & Service Information

The family of Louis C. Eisen created this Life Tributes page to make it easy to share your memories.

The Lord must have a special building project in Heaven because...