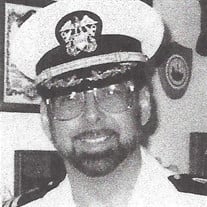 Loren W. Sibilla, age 75, of St. Clair died February 24, 2019. He was born April 26, 1943 in St. Clair to the late Ervin and Marian Sibilla. He married Gloria Wohl in 2013 in Port Huron, MI Loren served his country in the U.S. Navy (Seabees) in Vietnam, Thailand, Okinawa, and Guam and retired as a Commander after 32 years of service. He received several medals and honors for his military service. He traveled in Europe and served with the Mobile Construction Battalion 11 out of Port Hueneme, CA. He also served with the Air Force Special Operations Squadron in Thailand. Loren was a program coordinator for the St. Clair County Health Department and retired with over 34 years of service. Loren earned his Master’s Degree from the University of Michigan. He was a lifetime member of the Veterans of Foreign Wars, American Legion, and a 32nd degree lifetime Master Mason and Past Worshipful Master for the Evergreen Lodge #9, St. Clair, MI. Loren loved traveling and spending his winters in Florida. He also enjoyed running and playing his guitar. He is survived by his wife, Gloria Sibilla; son, Jeffrey Sibilla of Marysville; sister, Marilyn O’Brien (Patrick) of San Juan Capistrano, CA; one grandson, Griffin Sibilla of Marysville; along with a nephew, Curt O'Brien. He is preceded in death by his parents, Ervin and Marian Sibilla as well as his nephew, Craig O’Brien A funeral service will be held on Friday, March 1 at 6:00 p.m. at Young Funeral Home, China Twp. Visiting hours will also be Friday from 2:00-6:00 p.m. prior to the service. Following the service, Veterans Honor Guard Alliance will conduct Military Honors. Memorials are suggested to the Port Huron VFW. To leave a message of comfort visit www.youngcolonial.com

The family of Loren W. Sibilla created this Life Tributes page to make it easy to share your memories.

Send flowers to the Sibilla family.