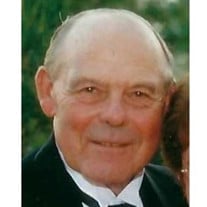 Leslie R. “Les” Osterland, age 91, of Richmond, passed away November 1, 2021. He was born January 10, 1930 in China Twp. to the late William and Alice Osterland. On May 5, 1956 Leslie married Barbara Kammer in Richmond. Les proudly served with the U.S. Army from 1951 to 1953 during the Korean War as a MP with the 503rd Military Police Battalion. Following his service to his country he was a lifetime area carpenter. He was a member of St. Augustine Catholic Church and the Knights of Columbus Council #2667, Richmond. Les enjoyed hunting, fishing and playing cards and will be remembered as a dedicated family man who loved his wife, children, grandchildren and great grandchildren. He is survived by his wife of 65 years, Barbara Osterland; children, Dan (Debbie) Osterland, Lee (Sandi) Osterland, Alan (Nikki) Osterland and Tricia (Jason) Millbrand; grandchildren, Jordyn, Michael, Jessica, Ashley, Benjamin, Gaston, Gracianne, Emma and Claire; great grandchildren, Brody, Rogue, Sloan, Scarlett and Alayna; siblings, Bill, Don and Bernie Osterland and Ruth Fessenden. He was predeceased by his siblings, Wilfred, Elmer, Gerald, Melvin and Edmund Osterland and Dorothy Endres. A funeral mass will be Tuesday November 9th at 11:00 a.m. at St. Augustine Catholic Church Richmond. Interment will be in St. Michael’s Cemetery, Richmond. Visiting hours are Monday 3:00 to 8:00 p.m. at Young Funeral Home, China Twp. and Tuesday 10:30 to 11:00 a.m. at church. A rosary will be offered Monday at 7:00 p.m. Memorials may be made to Grace Hospice or St. Augustine Church. To leave a message of comfort visit www.youngcolonial.com

The family of Leslie R. "Les" Osterland created this Life Tributes page to make it easy to share your memories.

Send flowers to the Osterland family.