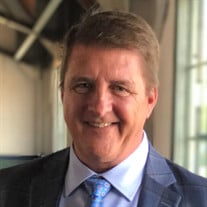 Kevin Lee Drummond, 57, of St. Clair, passed away peacefully surrounded by his family Thursday November 5, 2020. He was born February 28th, 1963 in Jackson to Lendora (Lynn) Berry and Robert Drummond. Kevin grew up in Eaton Rapids and graduated in 1981 from Eaton Rapids High School. He married Kelly Drummond on June 4th, 1988 and they enjoyed 32 years of close friendship, love, and adventure. Kevin graduated from Western Michigan University in 1986 with a degree in accounting. He worked as a CPA before attending John Marshall Law School in Chicago, IL. After graduating and passing the Bar, he worked for the Securities and Exchange Commission for several years. Kevin and his young family then moved back to Michigan where Kevin worked for Michigan Packaging Company until 1997, when he purchased Butler Plastics Co. in Marine City. He was a dedicated owner, and treated every coworker and employee as family. He was invested in his community and cared deeply for his employees and friends. His sense of humor and quick wit will be deeply missed by them all. Kevin is survived by his wife, Kelly Drummond (Blashill), his mother, Lynn (Bill) Berry, his brother Mark (Brenda) Drummond, and his three children Sarah (Michael) Hubbard, Andrew Drummond, and Scott Drummond. He was preceded in death by his father Robert Drummond. Kevin was a dedicated son, husband, uncle, and father, and was very proud of the family he had. He was excited to become a grandfather for the first time in the spring of 2021. A memorial to celebrate his life will be scheduled at Young Funeral Home in St. Clair. The date will be announced in spring of 2021. In lieu of flowers, please consider making a donation to Blue Water Hospice in Marysville in Kevin’s name. To leave the family a message of comfort please visit: www.colonialchapel.com

The family of Kevin Lee Drummond created this Life Tributes page to make it easy to share your memories.

Send flowers to the Drummond family.