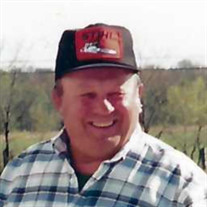 Kenneth G. Volkman Sr., age 79, of China Twp., passed away May 9, 2022. He was born September 8, 1942 to the late John and Lucille Volkman. He married Kathleen Piper on February 24, 1962. Ken was baptized and confirmed at St. Paul’s Lutheran Church, Casco Twp. He was a hardworking man who was employed by Chrysler for 37 years. Aside from work, Ken was a lifelong farmer, who enjoyed working on his farm alongside his family and friends. He is survived by his children, Ken Jr. (Teresa) Volkman, Charlie (Lisa) Volkman, Ronda Volkman; grandchildren, Lauren (Mark) Morley, Ryan (Kelly) Volkman, Dylan (Karyssa) Volkman, Caleb Volkman, Alicia Volkman (Nolan), Charlie (Monica) Volkman; 10 great grandchildren; brother, Dave (Pam) Volkman, and many nieces and nephews. He is preceded in death by his son, Kevin “Beefy” Volkman; brothers, Jack, Don, and Charlie Volkman. According to Ken’s wishes, cremation arrangements have been made with Young Funeral Home, China Twp. A private celebration of life will take place at a later date. To leave a message of comfort visit www.youngcolonial.com

The family of Kenneth G. Volkman Sr. created this Life Tributes page to make it easy to share your memories.

Send flowers to the Volkman family.