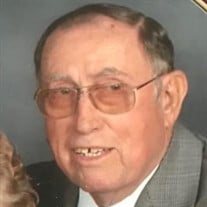 Kenneth Lorne Genshow, age 94 of Marine City, passed away peacefully with his wife by his side on March 31, 2021. Ken was born October 22, 1926 in China Twp. to the late Harvey and Clara Genshow. On June 26, 1948 Ken married Charlotte Simons at St. Paul’s Lutheran Church, Peters. Ken loved farming and was a longtime area farmer. He also drove truck delivering Shell Oil and later hauling castings from New Haven Foundry to Wisconsin by semi-truck. He was a life-member of St. Paul’s Lutheran Church, where he was baptized, confirmed and married. He also sang in the choir, was a member of the Church council and the Brotherhood Group. Ken and Charlotte also hosted many church camp outs on their property. Ken loved a good fish fry, especially when they served perch, his favorite. Among the many activities he enjoyed were the Square Dancing Club, snowmobiling, the card club (for 40 years) and RV camping with family and friends. He will be remembered by his family as a beloved husband, father and grandfather. He is survived by his wife of nearly 73 years, Charlotte Genshow; children, Pamela (Duane) Salamin, Todd Genshow and Kevin (Carol) Genshow; grandchildren, Jason Salamin, Amanda Salamin, Nicole (Jeff) Cieslak, Ryan (Kara) Genshow and Kyle (Lichelle) Genshow; great grandchildren, Connor, Kane, Case, Autumn, Lucas and Levi; sister, Betty Prange; many nieces and nephews. He was preceded in death by sister and brother in law, Dorothy and Clint Sharrow and brother in law, Merton Prange. Memorials are suggested to St. Paul’s Lutheran Church, Peters, Michigan Private graveside services will be held for immediate family. Arrangements by Young Funeral Home, China Twp. To leave a message of comfort visit www.youngcolonial.com

Kenneth Lorne Genshow, age 94 of Marine City, passed away peacefully with his wife by his side on March 31, 2021. Ken was born October 22, 1926 in China Twp. to the late Harvey and Clara Genshow. On June 26, 1948 Ken married Charlotte Simons... View Obituary & Service Information

The family of Kenneth Lorne Genshow created this Life Tributes page to make it easy to share your memories.

Send flowers to the Genshow family.