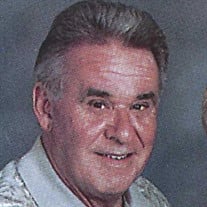 Joseph “Dick” Leeper, age 83, of St. Clair, passed away peacefully on August 21, 2021. He was born in Uniontown, Pennsylvania on October 30, 1937 to the late Joseph and Helen Leeper. Dick was born and raised in Uniontown, something he took great pride in, until he graduated high school. After high school he moved to Detroit where he met his wife, Lois. Dick married Lois Sheeran on October 25, 1958, who preceded him in death in 2019. Dick worked as a master electrician and engineer. Through hard work and dedication to his craft, he became the go to guy when it came to giving insight and problem solving. Dick was the jack of all trades; he was a handy man who worked hard all his life. Not only in his career, but he worked hard to help others as well. In his spare time, Dick enjoyed cutting grass on his tractor and raking leaves. He had an interest in cars, he was very mechanically inclined. Dick was a member of the Parks and Rec board in Roseville, he served as a police reserve for the city of Roseville for 20 years, he was a member of the Knights of Columbus for over 45 years, and a resident of St. Clair for over 20 years. He is survived by his children, Larry (Margaret) Leeper, Tony (Paulette) Leeper, Marian (Joe) Bommarito, Kelly Leeper; grandchildren, Sarah Leeper (Dane), Jade Leeper, Blake Leeper, Andy Leeper, Evan Mabry, Alex Leeper, Austin Mabry; siblings, Maryann Merkosky, Robert Leeper. He is preceded in death by his loving son, Chris Leeper; brothers, Frank Leeper and Raymond Leeper. Funeral Mass will be Wednesday, August 25th at 11:00 a.m. at St. Mary’s Catholic Church, St. Clair. Visiting hours will be Tuesday, August 24th from 2:00 – 8:00 p.m. at Young Funeral Home, China Twp. with a rosary being recited at 7:00 p.m. Interment at St. Mary’s Cemetery, St. Clair. Memorials are suggested to the Special Olympics Michigan. To leave a message of comfort visit www.youngcolonial.com

The family of Joseph "Dick" Leeper created this Life Tributes page to make it easy to share your memories.

Send flowers to the Leeper family.