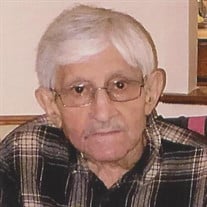 John Yaschen, age 88, of Marine City, passed away peacefully with family by his side on January 23, 2021. He was born June 19, 1932 in Detroit. John married Anna Ponus on June 24, 1950 in Detroit. Anna preceded him in death on February 14, 2020. He proudly served his country in the Korean War as a member of the United States Army. John worked as a machine repairman for several years for General Motors, retiring at the age 75. When he wasn’t working, John enjoyed going camping with his family. He enjoyed telling stories. He especially enjoyed telling stories about his personal life experiences. John was a hardworking man who was a great provider for his family. Which was something he took pride in. He was seen as “Jaja” to all his grandchildren and great grandchildren. He is survived by his children, Linda (Gerald) Hyden, Joseph Yaschen, MaryAnn Marcinkowski, Annette Bell; grandchildren, Selena (Scott) Osterland, Dave (Janel) Marlatt, Jeannie Yaschen, Adam (Kristal) Marcinkowski, Jason Bell; great grandchildren, Mattison and Kaden Marlatt and Jordan Osterland. He is preceded in death by his mother, Anna Yaschen (Labanwicz), and grandson, Joseph C. Yaschen “Jojo”. A funeral ceremony will be held on Wednesday, January 27th at 11:00 a.m. at Young Funeral Home, China Twp. Visiting hours will be Tuesday, January 26th from 3:00 to 8:00 p.m. and Wednesday from 10:00 to 11:00 a.m. prior to the service at the funeral home. Interment will be at Holy Cross Cemetery, Marine City where military honors will be conducted. Memorials are suggested to the Wounded Warrior Fund. To leave a message of comfort visit www.youngcolonial.com

The family of John Yaschen created this Life Tributes page to make it easy to share your memories.

Send flowers to the Yaschen family.