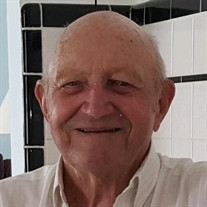 John C. Brozowski, age 91, of Columbus Township., passed away Thursday December 5, 2019. He was born on May 30, 1928 in Warren, Michigan to the late John and Mary Brozowski. He married Stephanie Kardasz on June 14, 1952 in Richmond, Michigan, and she preceded him in death on August 29, 2015. John is survived by his children Therese (Stephen) Timmons, Daniel Brozowski, and Larry (Frances) Brozowski; grandchildren Evan (Lisa) Timmons, Melissa (Alex) Barnett, Kendall (Ben) Foote, Pamela (Matt) Barr, and Matthew Brozowski; sister Bernadine Johnson; and several nieces and nephews. John is preceded in death by his brothers Clarence, Elmer, and Ralph Brozowski, and sister MaryAnn Brinker. John was an exceptional and loving husband, father, and grandfather, and had an uncanny knack for making an immediate friend of anyone he met. He liked nothing more than spending time with his many buddies playing cards while having an Altes beer. His other favorite pastimes included watching his Detroit Tigers and cowboy movies, listening to polka music, and enjoying the family-style chicken dinners at the Bavarian Inn in Frankenmuth. His sense of humor and love of practical jokes were legendary. John was a lifelong farmer, and delighted in his land and his animals. But most importantly, he was greatly loved by his family and many friends, and he will be greatly missed. Funeral services will be held at 11:00 a.m. Monday December 9, 2019 at St. Augustine Catholic Church in Richmond, Michigan. Visiting hours will be on Sunday December 8, 2019 from 2:00-8:00 p.m. at Young Funeral Home with a Rosary recital at 5:00 p.m. There will also be visitation at the church from 10:00 a.m. until the time of service. In lieu of flowers, the family requests donations be made to St. Jude’s Children’s Research Hospital. The family has set up a donation page: http://Giftfunds.stjude.org/johnbrozowski. To leave a message of comfort, visit www.youngcolonial.com.

John C. Brozowski, age 91, of Columbus Township., passed away Thursday December 5, 2019. He was born on May 30, 1928 in Warren, Michigan to the late John and Mary Brozowski. He married Stephanie Kardasz on June 14, 1952 in Richmond, Michigan,... View Obituary & Service Information

The family of John C. Brozowski created this Life Tributes page to make it easy to share your memories.