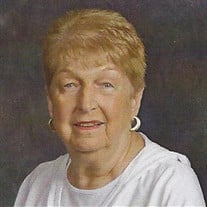 Johanna E. “Jo” Pretzer, age 85, of East China Twp., formerly of Macomb Twp., passed away on February 23, 2020. She was born January 3, 1935 to the late Emil and Lilly Neef. On May 12, 1956 Johanna married Edwin Pretzer, who preceded her in death on April 30, 2016. While in Mt. Clemens, she worked at Greco Title Company, Mount Clemens for several years. She was an active member of St. Paul Lutheran Church, Sterling Heights. As years passed, in 1991, Johanna and Edwin moved to Casco Twp., where they bought a farm. She then became a member of Immanuel Lutheran Church, St. Clair. Johanna loved shopping and spending time with her family, especially her grandchildren. She is survived by her children, Deborah Ereaux, Keith (Deborah) Pretzer, Denise (Andy) Zuckerberg, Kent (Shelly) Pretzer; grandchildren, Joshua, Lauren, Claire, Ben, Ashley, Courtney, Chelsea, as well as 5 great grandchildren. She is preceded in death by her granddaughter, Jennifer; and brother, Emil. A memorial service will be held on Thursday, February 27, 2020 at 5:00 p.m. at Young Funeral Home, China Twp. Visiting hours will be Thursday 1:00 p.m. to 5:00 p.m. at the funeral home prior to the service. Memorials are suggested to Leader dogs for the blind. To leave a message of comfort visit www.youngcolonial.com

The family of Johanna E. "Jo" Pretzer created this Life Tributes page to make it easy to share your memories.

Send flowers to the Pretzer family.