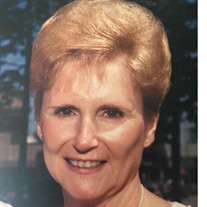 JoAnn Sykes (Nee Schneider), age 87, of Algonac passed away peacefully surrounded by family on March 30, 2021. She was born January 18, 1934 in St. Clair to the late Harvey and Evelyn Schneider. JoAnn married William Sykes on June 27, 1953. She worked for Chris Craft, Packard Motor Company, International Casting Corporation, and at The Voice Newspaper where she retired from in 1997. JoAnn was a life member of the VFW post 7573 in New Baltimore, she was past president of the Amvets ladies auxiliary post 52 in New Baltimore, she was also a member of the Fraternal Order of Eagles in Fairhaven. JoAnn enjoyed her time camping, boating and spending time on the beach taking in the sun. Most of all JoAnn loved the time she spent with her family and was truly a “Family First” kind of woman. She is survived by her husband of 68 years, William Sykes; children, Deborah Wlash, Linda (Doug) Berry, Denise (Robert) Hertzberg, Dale (Deborah) Sykes, Guy (Bonnie) Sykes, Ron (Michele) Sykes; 19 grandchildren, 20 great grandchildren and 2 great great grandchildren. JoAnn is preceded in death by her brother, Ron Schneider and son in law Robert Wlash. A Funeral Mass will be Tuesday April 6, 2021 at 12 noon at Holy Cross Catholic Church, Marine City with visiting from 11:00 a.m. until time of service. Interment will take place in St. Mary’s Catholic Cemetery, St. Clair. In lieu of flowers memorials may be directed to the Blue Water Hospice Home or Holy Cross Cardinal Mooney School. To leave a message of comfort visit www.youngcolonial.com

The family of JoAnn Sykes Nee Schneider created this Life Tributes page to make it easy to share your memories.