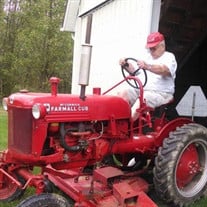 James H. Owens, age, 87, of Cottrellville Twp., passed away on January 9, 2021. He was born on October 10, 1933 to the late Michael and Mary Owens. Jim married Beverly Hahn on January 8, 1955 she preceded him in death on July 8, 1987. On August 8, 1992 Jim married Marjorie Caroline Owens (Watson) and she preceded him in death on January 4, 2018. Jim was a truck driver for many years and retired in 1992 after 25 years of service. He also belonged to The Port Huron Teamsters Local 339. Jim was a member of the St. Clair Hunt and Fish club, he loved playing the lottery, keeping up with social media on his computer, dining out and visiting with his buddies, Jim was a frequent visitor and liked spending time at the Corner Grocery and the M.C. Grill where we was known as “Uncle Jim”. He also enjoyed playing cribbage (especially winning), cutting the grass and keeping up with the yard, Jim liked his beer and wine and Enjoyed BoatNerd and following the freighters on the lakes. He is survived by his daughters, Debra Owens, Maureen Owens, Jackie Owens; step sons Tom (Vicki) Watson, Robert (Trishalana) Watson; sisters, Mary Elizabeth Bachler, Margaret Gilbert along with several nieces and nephews and JoJo the cat. Jim is preceded in death by his wife, Beverly Owens, wife, Marjorie Caroline Owens (Watson); brother, Patrick Owens. Cremation has taken place and a celebration of life will take place at a later date. Memorials may be made to the Marine City Fire Department. To leave a message of comfort visit www.youngcolonial.com

The family of James H. Owens created this Life Tributes page to make it easy to share your memories.

Send flowers to the Owens family.