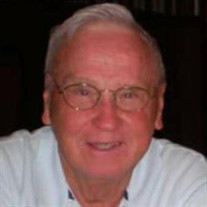 James “Jimmy” DeBoyer, age 87, of Algonac passed away with his family surrounding him on Oct. 3, 2020. He was born November 29, 1932 in Detroit to the late Paul and Hazel DeBoyer. He moved to Roseville at age 3 and to Fair Haven at age 9. He attended Pointe Tremble Elementary School and Graduated from Algonac High School in 1951. He was inducted as a Charter Member of the Algonac High School Sports Hall of Fame in 1996. He earned 15 varsity letters in his tenure at AHS. He was a member of the 27 consecutive victory football team leading them to 4 consecutive league championships being named All-State in football his senior year. He also was All-State in Track and Field his senior year earning 2nd place finishes in the 100 and 220 yard dashes, 2nd in the Long Jump and 2nd in the 880 yard relay at the Michigan State Track and Field Championships. He held the school record in the Long Jump for 56 years. He attended the University of Detroit and played football for the University. He was drafted into the U.S Army in 1952 during the Korea War as a Corporal combat medic and served for 2 years. He married Dorothy Martin on Dec 22, 1955 and remained married 65 years till his death. Jimmy was an avid outdoorsman enjoying hunting and fishing with his family and friends. He also could be seen at nearly all the Algonac High School sporting event cheering on the Muskrats. He was a carpenter, home builder and drywaller. Love of his family was his greatest attribute and drove his life. He is survived by his wife of 65 years Dorothy DeBoyer; his children, Diann, James “Jimmy”, Jon and Jay. He was blessed with 8 grandchildren and 5 great-grandchildren. He is preceded in death by his sibling, Hazel “Betty”, Paul “Jr.” and Harold “Freckles”. A funeral service will be held Wednesday October 7, at 11:00 a.m. at Young Funeral Home, China Twp. Graveside prayers will follow at Oaklawn Cemetery in Algonac. Visiting hours will be Tuesday October 6 from 2:00 to 4:00 p.m. and 6:00 to 8:00 p.m. at Young Funeral Home, China Twp. along with Wednesday 10:00 a.m. until time of service. In Lieu of flowers memorials may be made to Blue Water Hospice. To leave a message of comfort visit www.youngcolonial.com

The family of James "Jimmy" DeBoyer created this Life Tributes page to make it easy to share your memories.

James “Jimmy” DeBoyer, age 87, of Algonac passed away with his...

Send flowers to the DeBoyer family.