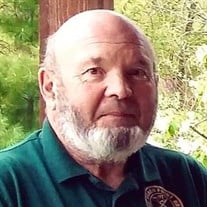 James “Jim” Liebetreu, age 72, of St. Clair, passed away peacefully with his wife by his side on April 20, 2020. He was born January 5, 1948 to the late Norman and Frieda Liebetreu. Jim graduated from St. Clair High School in 1966. He married Diane Cooley on July 15, 1972. As a child, Jim grew up working on the farm in Casco Twp. He continued farming until 1986 when he transferred to the city of Port Huron where he worked for the DPW until 2008. From 1985 to 1990 Jim enjoyed coaching his tug of war team, the Rope Busters. That Rope Buster team he led never lost, going undefeated for all 5 years they competed. Jim was an active member at St. Matthews U.C.C., Adair. He had served on the church council, and he was a big part in preparing the church’s annual chicken dinner. In his spare time Jim was an avid gardener, and he especially enjoyed social gatherings with his family and friends. He is survived by his wife of 48 years, Diane; children, Michael (Susan) Liebetreu, Jamie (Matthew) Mackley, John Liebetreu; grandchildren, Katelyn, Mitchell, Emily, Joshua, Andrew, Scarlett; brother, Keith (Kathy) Liebetreu; in laws, Jerold and Joyce Cooley, Richard (Wanda) Cooley, Esther Liebetreu, as well as several nieces and nephews. He is preceded in death by his brother, David Liebetreu, and nephew, Kurt Liebetreu. Cremation arrangements with Young Funeral Home, China Twp. A celebration of life will be Saturday July 25, at 10:30 a.m. at St. Matthews UCC followed by a procession to Hillside Cemetery. The memorial service will take place outside, so please bring a mask and lawn chair. Memorial contributions are suggested to Michael J. Fox Parkinson’s Foundation or Blue Water Hospice Home, Marysville. To leave a message of comfort visit www.youngcolonial.com