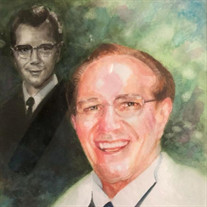 Rev. Harvey William Reh, age 90, of Warren, went home to be with the Lord, March 26, 2022. He was born October 11, 1931 in Detroit to the late Gustave and Nellie (Schunter) Reh. On June 6, 1992 Harvey married Lynn Pipper. Contracting Polio at age 4, Harvey was unable to participate in many athletic activities, so at age 8 he began playing piano and developed a love of music. He also had a great passion for drawing, painting and wood carving. Harvey graduated from Denby High School, Detroit, in 1951. He then attended Mission House College and Seminary in Plymouth, Wisconsin. He was ordained June 7, 1959 at St. Matthews and St. Peters Evangelical and Reformed Church, Detroit. During his career he served several churchs in Wisconsin, Iowa and Michigan. Harvey’s greatly enjoyed his final assignment of 22 years with St. John’s United Church of Christ, Marine City and in 2015 he became pastor emeritus. He will be dearly missed by his family, friends and those he touched through his ministry. He is survived by his wife of 29 years, Lynn Reh; daughter, Ann Reh of Middleton, Wisconsin; brother, Reginald (Katherine) Reh of Brighton and several nieces and nephews. He was preceded in death by his wife, Adell Reh and brothers, Clifford and Marvin Reh. A Memorial Service will be held Saturday April 30, 2022 at 12:00 p.m. at St. John’s United Church of Christ, 527 N. William St., Marine City, MI 48039. The family will receive visitors prior to the service from 10:00 a.m. to 12:00 p.m. at the church. Memorials are suggested to St. John’s UCC, Marine City. Arrangements by Young Funeral Home, China Twp. To leave a message of comfort visit www.youngcolonial.com

The family of Rev. Harvey William Reh created this Life Tributes page to make it easy to share your memories.

Send flowers to the Reh family.