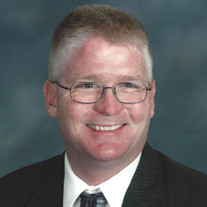 Gery George Ureel, age 57, of Marysville, passed away peacefully on March 16th, 2020 after a long battle with ALS (Lou Gehrig’s Disease). He was born January 16th, 1963 in Mount Clemens to the late Eugene and Helen Ureel. On June 30th, 2010 Gery married the love of his life, Jennifer Lou. He was a letter carrier for the United States Postal Service and retired after 25 years of service. Gery was a spiritual man, he was an active parishioner at St. Mary’s Catholic Church, St. Clair, as well as a 4th degree member of the Knights of Columbus Council 2251. Gery enjoyed many outdoor activities including farming, hunting, traveling, and camping. Later in life he found a new passion in making maple syrup with his wife. However, his greatest joy was spending time with his wife and step daughter, Shannon, whom he adored. Gery took great pride in being a devoted husband and man of his faith. He is survived by his loving wife of 9 years, Jennifer; step daughter, Shannon; siblings, Dennis (Ann), Richard (Gale), Diane (Paul) Raska, Mark, Linda (Don) Gunter, Michael, Mary Ann Boyd, Joseph (Nicole), as well as many special family members and friends. A Funeral Mass will be held on Monday, March 23rd at 2:00 p.m. at St. Mary’s Catholic Church, St. Clair. Attendance at mass is limited to 10 people. Visitation will be on Sunday, March 22nd from 3 to 8 p.m. at Young Funeral home, China Twp. The family will be leading a rosary at 7 p.m. on Sunday. In lieu of flowers, memorial contributions are suggested to the wishes of the family. To leave a message of comfort visit www.youngcolonial.com

Gery George Ureel, age 57, of Marysville, passed away peacefully on March 16th, 2020 after a long battle with ALS (Lou Gehrig&#8217;s Disease). He was born January 16th, 1963 in Mount Clemens to the late Eugene and Helen Ureel. On June 30th,... View Obituary & Service Information

The family of Gery George Ureel created this Life Tributes page to make it easy to share your memories.

Send flowers to the Ureel family.