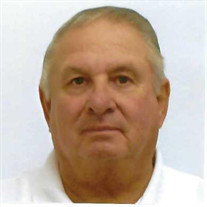 Franklin Vernon Dodea, of St. Clair, passed away May 12, 2022 at home surrounded by his family at the age of 80. He was born in St. Clair on January 28, 1942 to the late Lorean and Kathryn (Burnor) Dodea. Frank served his 4-year tool and die apprenticeship at Mueller Brass in Port Huron and went on to work at Chrysler Sterling Stamping. He finished his working career at Detroit Edison, retiring after 30 years. Frank married Barbara (Blanchard) on September 23, 1961. They enjoyed over 60 years of marriage. Frank was a lifetime member at the Knights of Columbus. He loved golfing and traveling. Frank looked forward to planning the Mount Pleasant golf outing every year for 30 years with 18 couples of his closest friends. His favorite saying to tell the winner was “And you win nothing.” Frank enjoyed traveling to Florida in the wintertime to be on the beach, play golf and tennis, and go to breakfast with his Wednesday morning buddies. Frank’s greatest gift was his sense of humor and quick wit. Once you met with him you would always remember him and he would never forget you. Frank cherished his family very much and was affectionately known as “Pops.” Spending quality time with his grandchildren and great grandchildren brought him the greatest joy. He is survived by his wife, Barbara; children, David N. Dodea, Traci K. (Carl) Liniarski, Six grandchildren, Jennifer (John) Qualls, Thomas Dodea (Lacey Carrow), Michael Dodea, Carl J. (Andrea) Liniarski, Jacob Liniarski, Megan Liniarski; great grandchildren, Jenna and John Qualls; brothers-in-law, Robert Blanchard and Arthur Cahours; sister-in-law Brenda (Karl) Miller, and several nieces and nephews. Franklin is preceded in death by his parents, Lorean and Kathryn Dodea; sister, Susan Cahours; and son Michael D. Dodea. Cremation arrangements with Young Funeral Home, China Twp. A memorial visitation will be held on Tuesday, May 17th from 4:00 p.m. to 7:00 p.m. at Young Funeral Home. Memorials are suggested to St. Clair Little League. To leave a message of comfort visit www.youngcolonial.com

Franklin Vernon Dodea, of St. Clair, passed away May 12, 2022 at home surrounded by his family at the age of 80. He was born in St. Clair on January 28, 1942 to the late Lorean and Kathryn (Burnor) Dodea. Frank served his 4-year tool and die... View Obituary & Service Information

The family of Franklin Vernon Dodea created this Life Tributes page to make it easy to share your memories.

Send flowers to the Dodea family.