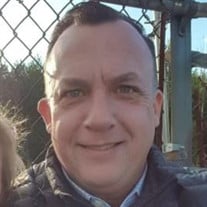 Edward Alexander Christie III, age 51, of St. Clair, passed away peacefully surrounded by his family and his dog, Pete on October 7, 2021. Ed was born on January 17, 1970 to Margaret and the late Edward Alexander Christie Jr. He graduated from Lahser High School, Bloomfield Hills class of 1988. Ed worked in the Aerospace and Defense industry. He spent much of his career overseas. In his spare time, Ed was an avid golfer. He enjoyed going to the local courses and often times would have Jennifer or his mother, Margaret, ride along with him while he played. Ed had an incredible sense of humor and he took pride in bringing humor to the conversations he had. He is survived by the love of his life, Jennifer Besimer; sons, Francis James Christie, Griffin Alexander Christie, as well as Jennifer’s children, Domenick and Abigail Sinacola; his mother, Margaret Christie; sisters, Jane (Joel) Simmermon, Kathleen (Rich) Steensma; nieces, Emily (Chris) Freeman, Sarah (Mason) Dickhut, Rachel Simmermon, Anna Steensma, Erin Simmermon, and his constant, loyal companion, Pete. He is preceded in death by his father Edward Alexander Christie Jr.; and aunt, Claire K. Bullis A memorial gathering will be held on Monday, October 11, 2021 from 4:00p.m. to 8:00 p.m. at Young Funeral Home, China Twp. A scripture service will be held on Monday at 7:00 p.m. In lieu of flowers, memorials are suggested to the St. Clair County Humane Society, SNAP. To leave a message of comfort visit www.youngcolonial.com

The family of Edward Alexander Christie III created this Life Tributes page to make it easy to share your memories.

Send flowers to the Christie family.