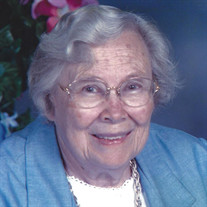 Dorothy N. Frank, age 92, of Marine City, went to be with the Lord on Saturday, May 16, 2020. She was born February 11, 1928 in Detroit to the late Norman and Edna Turnbull. On August 20, 1949 Dorothy married Desmond Frank, who preceded her in death in 1995. Dorothy used to waitress at Thomas’s Riverview Inn, Marine City. She was a long-time member of St. Paul’s Lutheran Church, Casco. She was an active member of the WELCA group, altar committee, and building committee. She is survived by her children, David (Anne) Frank, Dale (Cindy) Frank, Neil (Sue) Frank, Norma (Steve) McConnell, Steven (Kathy) Frank, 10 grandchildren, 4 great grandchildren, as well as many nieces and nephews. She is preceded in death by her sister, Elaine Brettin. Private graveside services are being conducted with Young Funeral Home, China Twp. There will be a celebration of life for Dorothy at a later date. Memorials are suggested to St. Paul’s Lutheran Church, Casco. To leave a message of comfort visit www.youngcolonial.com

The family of Dorothy N. Frank created this Life Tributes page to make it easy to share your memories.

Send flowers to the Frank family.