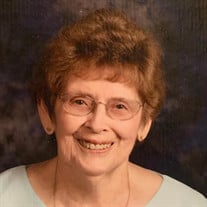 Donna Noreen Arnold Kennedy, of St. Clair, passed away on February 11, 2021, after a brief illness. Donna was born on April 12, 1929, to Harvey and Ethel Inches Arnold, of Brigden, Ontario. She was predeceased by her sister, Dorothy Johnston (Robert), her brother, Ernest Arnold, and her baby sister, Norma Jean Arnold. Donna worked on her parents’ farm until she became a student in the Sarnia General Hospital nursing program, from which she graduated as an R.N. in 1950. She often said that, as much as she loved nursing, she would have preferred to become a veterinarian, a career not really open to women in the 1940s, and certainly not open to women of modest means. Along with humans, she has nursed various cats, dogs, cattle, and horses throughout her life. Her mother told the story of how Donna tried to sneak a horse up to her second-floor bedroom one night because it was cold outside, but the horse had very noisy feet! And there was the time she revived our beagle, Tippy, by giving it chest compressions after the dog apparently had a heart attack. Tippy lived for several years after her brush with death. During nursing school Donna went on a double date with her friends, Betty Watson and Tom Guffey, and met Bob Kennedy, who was stationed with Tom at Selfridge Air Force Base. They were married on November third, 1951, in Brigden. After moving to St. Clair, Michigan, the Kennedys had four children. Donna did occasional special duty nursing when the kids were little, including the care of John McDonald, a St. Clair police officer injured in the line of duty. She began working at Mercy Hospital in the mid-1960s. She was well known as an accomplished cardiology nurse. Donna participated in the Jaycee Auxiliary and the Child Study Club. She was famous for the elaborate costumes she created for her four children for the summer carnival children’s parade. One year they went as a hospital ER team, complete with a dolly on a stretcher hooked up to an IV. She also loved to knit and provided countless baby layette sets to new parents. The day before she died she was preparing to knit caps for newborn babies. She was a member of Immanuel Lutheran Church for over seventy years, serving on the Altar Guild for most of that time. Donna participated in several mission trips as part of the Mission in Action team, traveling to Panama, Nicaragua, Guatemala, and Haiti, where she formed a lasting bond with her Haitian hosts, Leonard Isidor and his wife. After retiring from Mercy 1994 she worked part-time at Cardiology Associates. Donna also volunteered at the People’s Clinic, a free clinic run by Mercy Hospital serving people in need. She reluctantly retired completely when she gave up driving. For the last several years she participated in a physical fitness program called Body Recall, where she leaves many dear friends. Until a week or two ago she was attending Sunday service at Immanuel Lutheran Church with her dear friend Martha Dougherty. Donna was pleased to receive a visit from her dear Pastor Dave Dubois in the hospital. Donna was the guest of honor at a lovely party in the summer of 2019 to celebrate her ninetieth birthday! She welcomed over 75 guests. Donna lost her husband Bob, exactly five years to the day of her own death. She is survived by her children, Patricia Kennedy, of Massachusetts, Robert Kennedy II (Betty), of St. Clair, Thomas Kennedy, of Michigan, and Nancy Kennedy, of Virginia. Donna was also the proud grandmother of five grandchildren, Aaron Kennedy, of St. Clair, Samantha Duchene (Josh), of Michigan, Christina Kennedy, of Florida, and Aidan Novo and Diem Novo, of Massachusetts. She leaves one great-grandchild, Jackson Lamere, of Massachusetts. Donna leaves behind several dear Canadian relatives, Judy and Al Coleman, Jane Johnston (Brenda Polnick), Tracy Coleman, Lisa Coleman-Trudell (Todd), and great-nephew and niece, Jordan and Alexis Trudell, Barbara Hartley, Deborah Dionne, and James Arnold, all of Ontario. She leaves her dear friends, Lois Clubb, of Ontario, Ruth Pflaum, of Minnesota, and many friends from Mercy Hospital. She also leaves her beloved cats, Buddy and Tugger. Services will be private, with a memorial service planned for the summer. Donations may be made to: Immanuel Lutheran Church – Child Fund, 415 N. 9th Street, St. Clair, MI 48079 The Haiti Lutheran Mission Society-USA, PO Box 22544, Lincoln, NE 68542-254 Humane Society of St. Clair County, 6177 Fred W. Moore Highway, China Township, MI 48054

Donna Noreen Arnold Kennedy, of St. Clair, passed away on February 11, 2021, after a brief illness. Donna was born on April 12, 1929, to Harvey and Ethel Inches Arnold, of Brigden, Ontario. She was predeceased by her sister, Dorothy Johnston... View Obituary & Service Information

The family of Donna Noreen Arnold Kennedy created this Life Tributes page to make it easy to share your memories.

Send flowers to the Kennedy family.