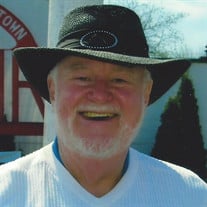 Dale Wesley Driscoll, age 78 of St. Clair passed away on November 12th, 2019. He was born to the late Ansell and Bernice Driscoll in East Grand Forks, MN. on August 17th, 1941. Dale married Esther Little on December 12th, 1970. Together they raised five children. Dale lived his life to the highest standards. Always doing for others. His work ethic was superior in all that he did from his hairstyling days at Dale’s Lions Mane to salesman at St. Clair Chrysler. To say he was hardworking was an understatement. Dale and Esther enjoyed many years of golfing with their family and friends. His knowledge and love for football was well known as he ran fantasy football for many years. Dale had many talents from woodworking, to cooking for a crowd. He was loved by so many and always welcomed you into their home. He is survived by his wife Esther; children, Jennifer (Mark) Phillips, Tiffany (Pete) Meldrum, Tyler Driscoll, Josh Driscoll (Lacee Melberg), Jeff (Theresa) Shafran. Grandchildren; Jordan Jackson, Tyler Jackson (finance’ Bailey David), Estee Dale, Rorie Dale, Evelyn Meldrum, Carson Meldrum, Philip, Blake, Trent, and Emily Shafran. Also survived by his sister, Marge Nienaber and brothers, Dick, Larry and Scott Driscoll. He will be forever remembered by numerous nieces, nephews, extended family and dearest of friends. He was preceded in death by his parents Ansell and Bernice, brothers Dennis, Gene and Leon Driscoll Cremation has taken place. A memorial service will be Saturday, November 23, 2019 at 3:00 p.m. at Young’s Funeral Home, China Twp. Visiting hours will be from 12:00- 3:00 prior to the service. In Lieu of flowers donations can be made to wishes of the family. To leave a message of comfort visit www.youngcolonial.com

Dale Wesley Driscoll, age 78 of St. Clair passed away on November 12th, 2019. He was born to the late Ansell and Bernice Driscoll in East Grand Forks, MN. on August 17th, 1941. Dale married Esther Little on December 12th, 1970. Together they... View Obituary & Service Information

The family of Dale Wesley Driscoll created this Life Tributes page to make it easy to share your memories.

Send flowers to the Driscoll family.