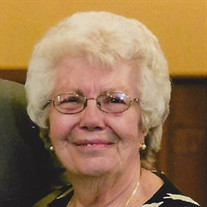 Constance Ann “Connie” Winter went to heaven on Friday December 18, 2020 where she joined hands once again with her beloved husband Jerry. Connie passed away unexpectedly, yet peacefully, at the age of 86 in her home at Lake Huron Woods in Fort Gratiot, Michigan. Connie was born on August 12, 1934 to the late Orville and Frances Smith in Utica, Michigan. After graduating from Utica High School in the Class of 1952, Connie worked as a secretary at Church’s Lumber in Utica where she met and fell in love with Jerry; a yardman at the lumber yard. Soon after their marriage on June 4, 1954, Jerry was deployed to Germany as a soldier in the United States Army. One highlight in her remarkable life took place in 1956 when Connie boarded a ship in New York City and traveled to Germany to be with her husband. The loving couple lived together for one year with a German family; a family whom they remained friends with long after Jerry’s deployment. When they returned to the United States, they raised a family at their home in Washington, Michigan; then ultimately in St. Clair. During that time, Jerry and Connie also spent time with family and friends at their cabin on Jose Lake; a cabin that was a true labor of love. Throughout her life, Connie enjoyed playing the piano and organ; she also sang and directed the Methodist Church choir. Always one who seemed to put others before herself, Connie found solace in ‘Meals on Wheels’ and delivered meals to those in need. Her devotion was to her family, where she enjoyed cooking, baking, and working in her flower gardens. She was known to be the last one eating at family get-togethers, only because Connie loved to reminisce with anyone who would listen. Over the years, Connie had many friends; none more special, however, than Irene McElreath. Connie is survived by her children; Vicki (Thomas) Watson; Mark (Carol) Winter; and Lori Dortman (Paul). Her grandchildren are Thomas (Meghan) Watson II, Ashley (Anthony) Fiscelli, Shelby (Brett) McGovern, Chelsea Kerr, Brannan (Aleisha) Dortman, Jordyn and Kendall Demmons. Also surviving her are Connie’s beloved great grandchildren Bo and Rory Watson; Reese and Brooke Fiscelli; Gavin, Kennedy and Molly McGovern; Dylan Kerr; and Layla Dortman. While Connie adored her children, it was her grandchildren and great grandchildren that put a spark into her later years. Connie is also survived by her sister-in-law Sally Knight from Plano, Texas; as well as several cousins, nieces and nephews. Connie was predeceased by her husband Jerry; her parents Orville and Frances Smith; her in-laws Clarence and Evelyn Winter; a sister Janet Meyers; a brother-in-law Dennis Winter; and great granddaughter Lennon Kerr. Visitation will be held on Tuesday December 22, 2020 at Young Funeral Home in East China, Michigan. Viewing will be from 2:00pm to 8:00pm; face coverings will be expected to be worn at all times while indoors. Connie’s funeral service will be held at the First United Methodist Church in St. Clair on Wednesday December 23, 2020 beginning at 10:00am – there will be no viewing in the church. Interment in Pine Hill Cemetery in Capac, Michigan will follow the funeral. Pallbearers are Thomas Watson II, Brett McGovern, Anthony Fiscelli, Brannan Dortman, Jon Tobey and Paul Brannan. Due to the current pandemic, there will be no gathering following the funeral; however, a “Celebration of Life” will be held with the family at a later date. Memorials may be made to the wishes of the family. As you grieve the loss of Connie Winter, find comfort in your heart knowing that she is happy – her wish to be reunited with Jerry has finally been fulfilled. To leave the family a message of comfort please visit: www.youngcolonial.com

Constance Ann &#8220;Connie&#8221; Winter went to heaven on Friday December 18, 2020 where she joined hands once again with her beloved husband Jerry. Connie passed away unexpectedly, yet peacefully, at the age of 86 in her home at Lake Huron... View Obituary & Service Information

The family of Constance A. "Connie" Winter created this Life Tributes page to make it easy to share your memories.

Send flowers to the Winter family.