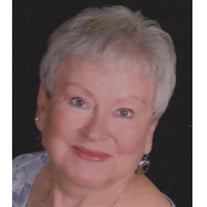 Constance M.(Connie) LaFrance-Battling Parkinson's was her Super Power. Connie LaFrance, 79, passed away surrounded by her family on Sunday, May 16, 2021 after several years long battle with Parkinson's disease and Lewy body dementia. Connie was born on December 17, 1941 in Trenton, MI to the late Donald and Cora Newman. She graduated from Trenton High School in 1959. After high school she attended Grace Hospital School of Nursing , graduating in 1962 as a Registered Nurse. Later in life she returned to school and received her Bachelor's of Nursing degree. Connie loved being a nurse, and spent her career working at River District Hospital, Select Specialty Hospital Macomb and Blue Water Hospice. She retired from Troy Beaumont Hospital. She married Sid LaFrance on October 3, 1992 in St. Clair and they enjoyed 28 wonderful years together. In retirement Connie learned to love the desert Southwest. She and Sid became snowbirds and spent 16 winters in Green Valley, AZ. They returned to Michigan fulltime in the spring of 2019 as Connie's illnesses prevented travel. She is survived by her husband; Sid LaFrance, her children; Robyn (Howie) Wideman, Cindy (Jeff) Harmer, Don (Carla) Graham, Chris (Cindy) Graham, Brian (Tera) LaFrance and Kurt (Leah) LaFrance. She is also survived by her eight grandchildren; Deanna and David Graham, Sean Seaton, Danielle Graham, Steven Harmer, Brianne LaFrance, David Wideman and Derek LaFrance, also three great-grandchildren; Aaron Jackson, Robbie Tomlinson and David Graham, Jr. She was preceded in death by her parents and granddaughter; Grace Elizabeth LaFrance. Funeral service will be held at 10:00 a.m. on Friday, May 21 at Young Funeral Home, China Twp. Visiting hours will be Thursday from 1:00 to 4:00 p.m. and 6:00 to 8:00 p.m. and one hour prior to the service. Interment will be Hillside Cemetery, St. Clair. The family wishes to thank the staff at Visions AFC and Blue Water Hospice for the compassion and care given to Connie. In lieu of flowers, please make memorial donations to Blue Water Hospice in Connie's name. To leave the family a message of comfort please visit: www.youngcolonial.com

The family of Connie M. LaFrance created this Life Tributes page to make it easy to share your memories.

Send flowers to the LaFrance family.