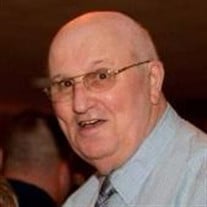 Charles Theodore Konik was surrounded by family when he died May 17, 2021 due to health complications. He was 77. Charles was born on June 14, 1943 in his childhood home in Marine City, MI to his parents, Theodore and Marion (Sova) Konik and was 6th of 8 siblings. He graduated from Holy Cross High School in 1961. After high school and for many years, “Charlie” enjoyed drag racing at Marine City’s Dragway. His love of cars began then and never ended. In December 1966, he was inducted into the United States Army where he served in Germany at a nuclear weapons facility during the Vietnam War. As an estimator for over 40 years, in 2008, Chuck retired from the Rochester Welding Company in Oxford, MI. Charles came from a large family, and in April 1968, he married the love of his life, Suzanne (Rochon) in which she too had a large family. Together they were blessed with the love and support of a very large family as their family too grew with four children through the years; Christine, David, Andrew, and Denise. Chuck and Sue were married 50 years when Sue passed away in December 2017, yet his love for her continued after her death and through the years until his death. Charles is survived by his four children, eight grandchildren, four great-grandchildren, and many beloved family members including brother, sister, brother and sister-in-law’s, niece’s and nephew’s, and many very close friends. He is preceded in death by his wife, Suzanne; Son-in-Law, Richard (Rick) Wood; sister and brothers; and niece and nephews. Charles Konik will be buried in a private ceremony on May 28, 2021. In lieu of flowers, donations in his name would be an honor and submitted to the Marine City Old News Boys or St. Jude Children’s Hospital. Arrangements by Young Funeral Home, China Twp. To leave a message of comfort visit www.youngcolonial.com

Charles Theodore Konik was surrounded by family when he died May 17, 2021 due to health complications. He was 77. Charles was born on June 14, 1943 in his childhood home in Marine City, MI to his parents, Theodore and Marion (Sova) Konik and... View Obituary & Service Information

The family of Charles Theodore Konik created this Life Tributes page to make it easy to share your memories.

Charles Theodore Konik was surrounded by family when he died...

Send flowers to the Konik family.