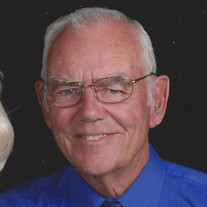 Carl Albert Eisen, age 90, of St. Clair, passed away on December 9, 2020 following a long struggle with many health issues. Carl was born September 1, 1930 in China Twp. to the late Carl and Albertha Eisen. Carl married Marlene Gramzow of St. Clair on August 3, 1957 at Immanuel Lutheran Church, St. Clair. She preceded him in death on September 2, 2019. He graduated from St. Clair High School and served in the United States Marine Corps during the Korean War. He worked at the St. Clair Macomb Consumers CO-OP for 12 years and retired from Michigan Consolidated Gas Co. after 25 years of service. Carl was a life long member of St. Peter’s Lutheran Church in St. Clair where he was baptized and confirmed. He served on the church council for many years along with the usher committee, property and management committee and various other committees along with many hours of volunteer church work. He served as a coach in the St. Clair Little League and also Babe Ruth Leagues. He was a devoted husband, father and grandfather and loved doing things for his family. He enjoyed sports, especially playing volleyball during his winter months in Florida. He played on a golf league in Florida as well as in the Pine Shores Golf League. Carl enjoyed traveling with his travel trailer and belonged to several camping groups in the area. He is survived by his sons, Richard (Theresa) Eisen and Thomas (Barbara) Eisen; grandchildren, Matthew Eisen, Jennifer (John) Fields, Bradley Eisen, Kaitlin (Kurt) Mossner and Lauren (Nick) Blank; great grandchildren, Felicity, Kaedence and Maverick Eisen; brothers, Rolland and George Eisen along with many nieces, nephews and many wonderful friends. He was preceded in death by his brother, Louis (Doris) Eisen; sister, Karen Eisen and sisters in law, Doris and Lois Eisen. Visiting hours are Tuesday December 15th from 2:00 to 4:00 and 6:00 to 8:00 p.m. at Young Funeral Home, China Twp. Masks are required and social distancing guidelines will be observed. A private family service will be held Wednesday at 11:00 a.m. Carl’s grandchildren will serve as pallbearers. Memorials may be made to Blue Water Hospice Home or St. Peter’s Scholarship Fund. To leave a message of comfort visit www.youngcolonial.com

The family of Carl Albert Eisen created this Life Tributes page to make it easy to share your memories.