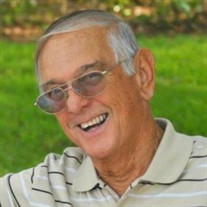 Captain Donald Leach, 87, of Lakeland, Florida, formerly of St. Clair, Michigan passed away on October 2, 2020. Donald was born on April 15, 1933, in St. Clair to the late Bruce and Leonna Leach. Donald attended St. Clair schools for the entirety of his education and it was here that his natural athletic ability was discovered. Most notably his accomplishments were on the basketball court including scoring an astounding 56 points in one game, which earned him an induction to the St. Clair High School sports hall of fame, playing on the United States Army basketball team, and multiple games against the Harlem Globetrotters. Donald began his career in 1959, spanning nearly 40 years, sailing with the Interlake Steamship Company. He worked his way from deckhand to Captain throughout this impressive career in which he sailed on every boat the company owned and retired the Wiliam J. Delancy, now known as the Paul R. Tregurtha. Donald spent his last 5 years with the company as Captain on the Mesabi Miner. Sports and sailing were perhaps the first loves of his life. He married Sally Lee in April of 1964 and remained married to her for 56 years until his death. Through this union, he became the most remarkable stepfather to two children, Michele and Michael. Don was an avid sports fan in addition to being an athlete. It is perhaps the lifelong sports conditioning that gave Don the endurance and self-discipline to fight a heart condition that had plagued him for over 20 years. He loved playing cards, walking, swimming, especially with his grandchildren and great-grandchildren, music, and dancing. The love he had for his family was the greatest attribute not only to his life but to those whom it had an everlasting impact on. He more than earned the name “Papa” from the three loves of his life, his grandchildren, Nicholas, Makenzie, and Michael. The love and lessons given to his grandchildren will be carried with them for a lifetime. He is survived by his wife of 56 years, Sally Leach, his children Michele Malane-Rutherford, Michael (Pam) Malane, and three grandchildren, Nicholas (Jennifer) Rutherford, Makenzie (Jim) Jurzysta, and Michael (Terri) Malane. He was blessed with 2 great-grandchildren, Riley and Reese. He is preceded in death by his parents Bruce and Leonna Leach, his brother, Robert Leach, and his in-laws Sherwood and Gladys Lee. A memorial service to honor his life will be held at a later date in his hometown of St. Clair, Michigan.

The family of Captain Donald Leach created this Life Tributes page to make it easy to share your memories.

Send flowers to the Leach family.